Solenn Heussaff believes that 35 is the ideal age for a man to get married. 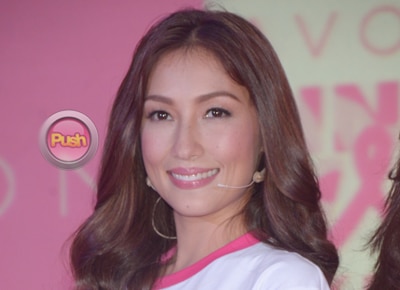 Despite celebrity wedding proposals being “the trend” this year, Filipina-French actress Solenn Heussaff said she believes that there’s really no “ideal age” for someone to settle down.
When asked at the recently-concluded Avon Pink War event, the Avon ambassador admitted that she thinks her brother Erwan, who is in a relationship with actress Anne Curtis, is still too young to tie the knot himself. “Wala, wala [pa silang planong magpakasal] and even if there was I wouldn’t be the one to share it,” she said.
The sexy actress quickly added, “Erwan is still very young, he’s still 27. So young for a guy dapat 35 pa ang mga boys.”
Anne herself has been very vocal that she’s not yet ready to get married anytime soon but if it were up to her, she would like her boyfriend of three years to propose to her in private because, “I am such an open book to everyone.”
But Solenn’s comment doesn’t mean that she doesn’t approve of the It’s Showtime host. “Well ako I always surround myself with people I love and people I like. If they’re bad influence, they’re out of my life. With Anne of course I love her. Anyone in in my group I love,” Solenn explained. “Of course I approve of their relationship and she brings out the best in my brother and vice versa, Erwan brings out the best rin in Anne.
A couple of months ago, Anne and Erwan’s relationship was in the spotlight after there were rumors that they had broken up. The chef-host for his part took the initiative to clarify that it wasn’t true via his Twitter account.
Solenn echoed this fact and said, “No wala, that’s just the people inventing. You know kailangan mag-chismis.” Was there a time that the two fought and that she had to come between them? “Wala silang conflict. I don’t think there’s ever been problems with them. It’s just people talking about it since they don’t post too much about each other on Instagram,” Solenn supplied.
She added, “My brother is not a showbiz person so she respects it. So Erwan won’t get any interviews or answer any questions from reporters about Anne.”
Solenn, for her part, is also in no rush to tie the knot even if she’s already living with her Argentinian boyfriend for over a year now. “Walang pressure. Yeah I live in and everyone knows that because I have very strong feelings about living in with someone before you settle down. I know it opposes the Maria Clara thing but to each his own. I respect everyone. For me if it happens it happens, if it doesn’t I’m not panicking. I’m still young,” she said.
However she confessed that when she was a lot younger, she imagined herself tying the knot and having a family as early as the age of 30. “Dati nung bata ako akala ko ‘pag 30 may family of five na ako wala pala. Now I still feel like I’m 21,” Solenn stated.
Celebrity