Richard Gomez denies he had a relationship with Gretchen Barretto

Richard Gomez says he and Gretchen Barretto were never an item 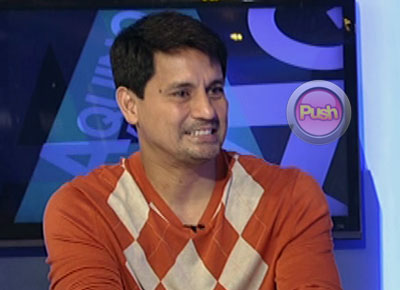 On Aquino and Abunda Tonight, Richard Gomez talked about The Trial, his sports interests, his plans for the 2016 elections, his friendship with Gretchen Barretto, and his marriage.
Richard is the President of the Philippine Fencing Association. Aside from fencing, his other sport is volleyball, but Goma said he also plays badminton for cross-training and he lifts weights in the gym to keep up his strength.
Richard also talked about his upcoming Star Cinema movie The Trial. He said working with the master director Chito Rono has always been a blessing for him. Goma shared that he got the most awards for his performance in Dahas, another Chito Rono masterpiece. Goma said of Direk Chito’s way of directing, “Ayaw niya na fake ang acting at kailangan may sense ang ginagawa mo.”
In the movie, he plays the husband of Gretchen Barretto’s character. Asked if he and Gretchen had a relationship when they were doing movies for Regal Films, Goma said matter-of-factly, “We’re very good friends.” Goma added that he’s been friends with Gretchen “even in the ‘80s when we were doing movies.”
Goma also praised one of the lead actors of The Trial and said that working with John Lloyd Cruz made him realize that John Lloyd is “very serious about his craft.”
Is Richard going to run in the 2016 elections? Richard said, “Well, Lucy is our Congressman and I’m here to support Lucy.”
Host Boy Abunda commented on the fact that people perceive Goma and Lucy’s marriage to be perfect, but is it? Richard said, “nothing is perfect.” However, what makes them a successful couple is that “we work things out. We’re a happy pair. We’re a good team.”
Celebrity