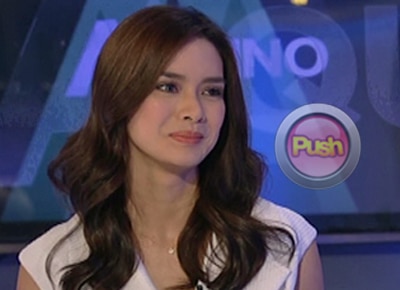 Did Erich really say “no” when Two Wives was first offered to her? Erich said she did because she then had an upcoming European trip which had been planned for a year already. Erich added, “Naniniwala po ako na kung para sa ‘yo ang isang bagay, para sa ’yo talaga.”

Asked how it was working with Kaye Abad and Jason Abalos. Erich said Kaye is really good and that “magaan katrabaho si Kaye.” Jason, she said, was her batch mate in Star Circle Quest.

24-year-old Erich is playing the role of Janine, a mother of a six-year old. Erich said she doesn’t mind playing the role of a mom if it will catapult her to older roles in future projects. She said she’s done it before in Katorse and Maria La Del Barrio.