Iza Calzado claims that she has Sharon Cuneta's 'blessing' for 'Biggest Loser.' 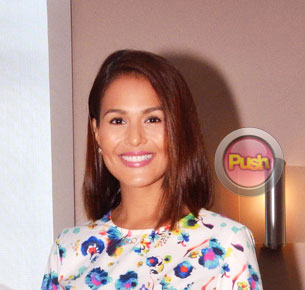 As the successor of the show that was originally hosted by former Kapamilya star Sharon Cuneta, The Biggest Loser: Pinoy Edition Doubles host Iza Calzado thought it fit that she obtain the Megastar’s blessing before she took on the project.
During an interview at the recently-concluded pocket press conference for the show, Iza revealed she immediately sought the approval of Sharon when she received the offer to host the local franchise of the fitness reality show two years ago when she transferred to the Kapamilya network. This is why as she underscored that there’s no need to compare the two of them.
“In filling in the shoes of Miss Sharon Cuneta… Sharon Cuneta is Sharon Cuneta is Sharon Cuneta is Sharon Cuneta. I can never replace her nor can I even try to compete with her,” she said.
The actress also underscored that it’s not even fair to compare her to the seasoned actress-host. “Actually it's not fair to compare anybody with anyone else so I'm honored that I'm hosting for the show. I'm happy because nanghingi naman ako ng blessing ni Megastar. Nung unang lipat ko pa lang po nagtext po ako sa kanya. Sabi ko, 'Ate gagawin ko po 'yung show and I hope it's okay and I hope may basbas mo' and she gave me her blessings,” Iza narrated.
She continued, “As a matter of fact, we saw each other for Voices of Visayas just the other day and we were joking Biggest Loser 1 and 2 and she was telling me to say hi to all the bosses and that it's such a good show.”
Since Biggest Loser Doubles will be her first game show hosting stint, Iza admitted that she had to battle some pressure to really excel in the job.
But thankfully she shared, “… Ginabayan naman ako ng Biggest Loser Pinoy Edition Doubles director at dahil doon naging payapa naman ang loob ko na kahit papaano nagawa ko ng matino kundi man mahusay ang trabaho ko.”
What has she learned about hosting such kind of show so far? “Andami kong natutunan bilang host mula sa aking director at staff kasi first time ko to have to deal with people directly. Kasi dati ang ginagawa ko mga noontime show o kaya variety show o kaya beauty pageant which is very hosting. Na nasa stage ka lang hindi ka nakikipagusap sa tao. Iba din 'yung kinakausap mo talaga sila at 'yung kwento ng buhay din nila ay kailangan mo ding ilathala. Andaming aspetong ‘yun eh. You have to be sensitive about how they are,” she explained.
A good example would be when she had to be mindful of her words are during the weigh-ins, wherein the contestant’s fate as to whether he’s leaving or staying on the show is determined by how much weight they’ve lost. She related, “Ibang klaseng experience naman daw 'yun nung una kasi kinakabahan talaga ako kasi iba 'yung impact non so may timpla rin 'yun.”
While she can empathize with the contestants as she also had weight issues before, Iza revealed that, “Siyempre as a host of Biggest Loser I couldn't be too attached to them. I had to keep a certain distance from them.”
But the most important lesson that she picked up from the show is how to become a better listener. “…Kasi minsan kapag may nagsasalita nagba-butt in ako kasi madaldal ako eh. So kailangan matuto kang makinig mas lalo. Feeling ko sa sobrang daldal ko at excited rin ako minsan naka-cut ko ang mga tao,” she ended.
The Biggest Loser: Pinoy Edition Doubles will debut on February 3 as part of ABS-CBN's primetime block.
Celebrity