Legendary Pinay performer Lea Salonga proved once again that she is arguably “The Voice of the Philippines” with her concert Playlist: The Repeat. 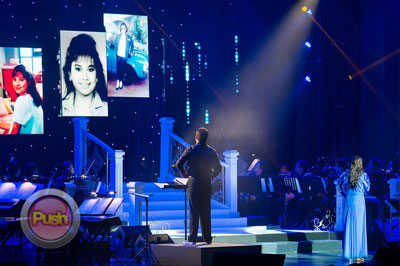 Legendary Pinay performer Lea Salonga proved once again that she is arguably “The Voice of the Philippines” with her concert Playlist: The Repeat. The concert celebrated her 35 years in show business. Held at the Philippine International Convention Center (PICC) last January 18, the show was artfully staged by her good friend, theater director Bobby Garcia, while brother Gerard Salonga, who quite literally stood behind his sister the entire time, was Musical Director.  They were expertly accompanied by the ABS-CBN Philharmonic Orchestra.

Lea looked back on the fashion and style mistakes that she admitted she also made growing up in the 80s.
The Broadway Diva performed songs that she has listened to, grown to love, and wished she could have sung at certain points of her illustrious career. Lea delighted audiences with classics such as Barbra Streisand’s “Evergreen” and Whitney Houston’s “Run To You” and “I Will Always Love You.” Younger fans were also in for a treat with modern beats like Alicia Key’s “Girl On Fire” and Lea’s acoustic version of Robin Thicke’s naughty hit “Blurred Lines.” Coach Lea reunited with Mitoy whose voice she lovingly described as “what singing was invented for.”
Giving the event extra excitement were Lea’s guests who were A-Listers in their own right. The Voice of the Philippines grand winner Mitoy Yonting, whom Lea proudly boasted as coming from her team, sang a medley of OPM staples with his beloved coach. In between her duets with Lea, Rachelle Ann relived her theatre crossover role Ariel by performing “Part Of Your World” from The Little Mermaid.
And as if passing on the torch, the original Kim shared the stage (and tips on living in London) with the new Gigi of the West End revival of Miss Saigon, Rachel Ann Go. They delivered two musical favorites: “For Good” from Wicked and “The Movie In My Mind” from Miss Saigon which thrilled the PICC audience. Lea called out that more than Nicole’s parents, the person who was really excited about her singing debut was lola who was also in the audience.
But perhaps the most touching moment of the evening was a surpise Lea sprang on the audience. Since she fell victim to surprises in the first run of Playlist last December, Lea vowed that this time it was her turn.  She then called on her daughter, eight-year-old Nicole Chien who, with a little encouragement sang “Yesterday’s Dream” as the stage was filled with nostalgic images of her and Lea. Old friend Martin chatted up a storm with Lea.
But the evening could not have been complete without another surprise. In the middle of doing her spiels, Lea was caught by surprise when no less than Martin Nievera crept up on her. The crowd cheered affectionately and after some hilarious banter, as expected from the Concert King, they sang the hit duet “After All.” As a trubite to one of her own movies, Lea sang “Sana Maulit Muli” hinting also that perhaps it’s time for her to another film.
With a comprehensive repertoire of foreign and local tunes, accented with heartwarming guest performers (announced or otherwise), Playlist was definitely a complete musical experience. And to amp up the energy even more as it was brought to a close, Lea roused the crowd to its feet with Abba’s unforgettable dance hits: “Mamma Mia,” “Take A Chance On Me” and “Dancing Queen.”
Photos by Jaypee Maristaza
Celebrity