Arjo Atayde says that he wants to do comedy after 'Dugong Buhay.' 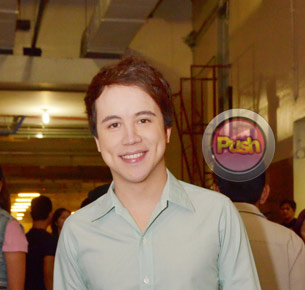 Arjo Atayde expressed his gratitude for the great feedback that he received in the now defunct soap Dugong Buhay. “Actually very thankful ako about their comments kasi nagustuhan nila ‘yung acting ko and my only role naman as an actor is to portray one role and second is to inspire people. I have to portray it as if na parang I want to touch people’s lives with that certain weapon which is acting,” he said in an exclusive interview with Push.com.ph.
With his mom Sylvia Sanchez working in showbiz, Arjo admitted that there is pressure to excel in his craft. “At first of course may pressure ‘yun pero as time went on ang nangyari was nawala na siya unti-unti, I know which is good. Right now kasi in my span of my career I’m still learning, I’m still in the progress level pero I know where I stand and I know my capabilities naman kahit papaano so kahit papaano nawala naman ‘yung pressure pero kahit anong mangyari there is,” he said.
Among the actresses of the Kapamilya network, Arjo admitted that he wants to work with Alex Gonzaga. “Among the girls kahit sino pero gusto ko makatrabaho probably si Alex Gonzaga kasi from Dugong Buhay medyo heavy siya di ba, pero ngayon naman gusto ko namang gawin medyo light and from there don ko masasabi kung saan ako talaga ma-place.”
The actor shared that he wants to try doing comedy to explore his craft and to test his capabilities. “Siguro to segue to a comedy show is a very hard thing to do pero siguro I can pull it off. I have confidence in myself naman and I’m willing to learn. I want to learn that certain path or way para masasabi ko kung saan ko talaga gusto ma-place at hindi ko pa nai-explroe ‘yung comedy, di ko pa nai-explore ‘yung kontrabida of course hindi ko pa nai-explore ‘yung pagiging lead actor so I want to explore everything.”
Arjo shared that it has always been his dream to be an actor. “Ever since, ano pa Esperanza days with my mom and when I saw ate Judy (Ann Santos), ever since gusto ko talaga and then eventually there was this one workshop na  nakuha ako.”
Celebrity