While Lea Salonga's honest opinions sometimes lead her to controversy, she believes that these could lead to changes in mindsets. 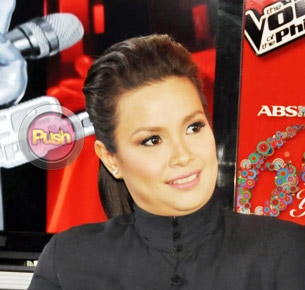 Isa sa mga tinutulak na kampanya ng international artist at Broadway star na si Lea Salonga ngayong taon ay ang “Positivity 2014”. Maliban sa kanyang insurance endorsement, isa din ito sa kanyang mga personal na kagustuhan na ikampanya. “Even in the smallest detail, it’s trying to encourage everyone to pay it forward and to move positivity to everyone. It’s not looking back, the whole utang na loob thing, it’s more of I have inspired somebody else, keep moving the energy forward. Our country has faced a lot of incredible calamity, man-made and natural, so it’s wonderful that there is a campaign called Positivity 2014 to try and instill that positive spirit in each and every Filipino.”
Napakalakas ng impluwensiya ni Lea sa kanyang mga tagahanga lalo na sa social media at aminado naman ito sa mga pranka at totoong nitong mga pinopost na minsan ay nauuwi sa kontrobersiya, tulad na lang isang pinost niya tungkol sa isang male TV host. Aniya, “Well I have found myself posting things that are a little more snarky and sarcastic and now being part of this campaign, I am taking upon myself to be a little more positive about the postings knowing that it is a force of influence and it is a force of change. And even my husband is very astute about it that if you’re post positive things, creating things that are more positive in the social media because social media accounts are like little newspapers with the readership of over 2.1 million. So he says you spread positivism to each and every one of them, you keep on moving forward. So I think I have also to keep within my head to keep on going.”
Dagdag pa ni Lea na maganda para sa kanya ang maging positibo para maging instrumento siya ng pagbabago, ngunit ang isang hindi magbabago. “I mean I will always post snarky things, but I mean if there is a positive effect then that is a good thing to.”
Hindi rin naman itong nangangahulugan na titigil na rin siyang magpost sa kanyang social media account. “I am not saying that I will absent myself from Twitter, no. But it’s what I enjoy using and I like spreading news, I like inspiring positive articles that I am able to find or like people send me, ‘Ms. Lea please look at this because this is something you should read, something you should look at’ and if I find myself relating to it or connecting to it in such a huge, positive way, I am going to spread this out and let people read about this or watch this video or make you happy.”
Siniguro din ng The Voice of the Philippines coach na hindi niya babawasan o ililimita ang sarili niya sa kung ano ang nais niyang ipahiwatig. “I don’t think so. But I think I just have to always keep in mind that whatever I post, is going to be read by 2.1 million people because I have 2.1 million followers and increasing and going up in number. So whatever I post, I post commentary, if I have an opinion na medyo there is something going on in the country and I feel the need and its my right to react. But if I find something that will make people smile or be happy, so I kind of balance the two. Although as a human being there will always be a side of me that’s blunt and honest and that is part of me na kasi e, that just me abut I also have to remember and constantly remind myself that it’s a very influential position to be in, to have that many followers to post something to make people do something positive and that’s good.”
Celebrity