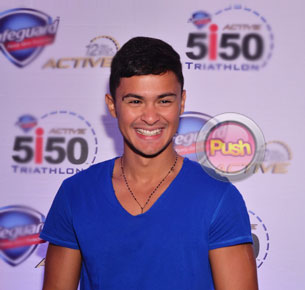 In an interview with Mateo Guidicelli, the actor remarked that he kind of misses being in a relationship. “Nakaka-miss din talagang magka-girlfriend, to be taken cared of, pero darating at darating din.” When asked if he’s looking for a girlfriend at the moment, he is quick to comment that he’s just waiting for love to come into his life. “Di ako naghahanap, basta darating lang.”
On his ex-girlfriend Maja Salvador, the actor said that he is happy for her and her new love, Gerald Anderson. “Masaya silang dalawa [ni Gerald], so maging masaya tayo [para sa kanila] because they're happy. Basta if people are happy, be happy for them also, always look at the positive of everything,” he said.
When asked about Jessy Mendiola, the actor said that he’s happy that the actress has a new suitor in the person of Sam Milby. It was reported that both had a mutual understanding which failed to develop into a relationship during the run of their teleserye Paraiso. “I’m happy for them and as long as masaya sila, basta ayos,” he commented.
After being a racecar driver, Matteo is now a triathlete. “I love this sport, I’m passionate [about it], it’s really one of my passions,” he shared. But with a busy schedule in showbiz, how does he balance everything? “It's just basically about choosing your priorities especially when my soap starts. I don’t treat it as a problem eh, you always look at the positive side of something, kumbaga this is my workout to maintain my body for my work. I always believe that if you're willing to do it, anything can happen.”
Matteo is set to star in an upcoming teleserye with Andi Eigenman titled Galema. He shared that it has become sort of a reunion project for the both of them. They starred in Agua Bendita three years ago. “Kumbaga ito ‘yung  reunion project namin ni Andi, three years na kaming hindi nagkakatrabaho after Agua Bendita, so nakakatuwa talaga.”
He remarked that both of them have grown so much and have matured that it was exciting to work again together. “After three years, we've changed so much as people, we've matured a lot and it’s exciting to work again, of course it's the same Andi, it's the same Matteo, but it's different in a way. The first time when we were together we were just young and now iba eh we got through a lot. When we look into each other's eyes it’s different eh, malalim na eh, so it's exciting.”
Celebrity