This year's celebration was a successful event attended by many reel and real life celebrity couples. 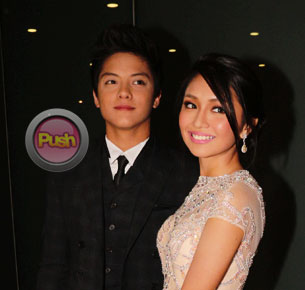 Held for the first time at the Fairmont hotel in Makati City, this year’s Star Magic Ball was another star-studded affair heralded by many showbiz couples. One of the first to walk down the red carpet were PBB Teens alumni and longtime rumoured couple Karen Reyes and Ryan Boyce. A definite scene-stealer was Kristine Hermosa and Oyo Sotto. Kristine admits she has never run out of offers to return to showbiz but she is just waiting for the right kind of project. “Bukas Na Lang Kita Mamahalin” stars Dawn Zulueta and Dina Bonnevie also glammed up for the night and were escorted by their respective hubbies. Newlyweds Maricar Reyes and Richard Poon also made their first showbiz outing as a couple tonight.
Although many believe that they are a couple already, Sam Concepcion and Jasmine Curtis were absolutely glowing when asked about their growing friendship. Jasmine says her big sister Anne gets along with Sam. Another rumoured couple who walked down the red carpet together were Paul Salas and Myrtle Sarrosa who admitted to PUSH that they would go out on group dates as early as last year. Lovely couple Robi Domingo and Gretchen Ho were also excited to join the party. The volleyball star admits she was excited to attend her first Star Magic Ball and says she never expected to be part of the showbiz industry.
Aside from the appearance of hot couples Kim Chiu and Xian Lim, Zanjoe Marudo and Bea Alonzo, Enrique Gil and Julia Montes, Gerald Anderson and Maja Salvador, an unexpected pairing for the night was found in Enchong Dee who decided to bring Gretchen Barretto’s daughter Dominique to the event. The two say they are nothing more than friends and just wanted to go to the party together. Same goes for Angeline Quinto and Erik Santos.
One of the last couples to walk the red carpet before the program started, Daniel Padilla and Kathryn Bernardo elicited screams from fans even before they became visible to the press. The “Got To Believe” stars eventually won  the Star Magic Ball Couple of the Night award which was awarded to them before the party proper. The two seem to have grown even sweeter with each other after finally admitting their “mutual understanding” status earlier this year.
Celebrity