Daniel Padilla says he still gets anxious during a show and he's still not used to screaming fans. 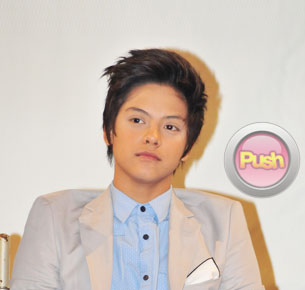 Daniel Padilla admitted that he’s still not used to fame and screaming fans, and that until now he still feels anxious whenever he’s in a mall show or performing in front of a big audience. “Hindi pa rin ako sanay, actually sa lahat ng shows at sa kahit ano never akong nasanay, parang feeling ko first time ko na show parate.”
Despite feeling the tension every now and then, he puts his best foot forward in everything he does to bring joy to his fans. “Basta mapasaya ko ‘yung mga fans ko ‘yun lang masaya na ako,” he said.
Daniel is currently starring in the Primetime Bida serye Got To Believe which earned high ratings during its pilot week. When asked if he already expected it considering that his love team with Kathryn has a solid fan base, the actor commented, “Wala akong in-expect na kahit ano basta ginagawa ko ‘yung trabaho ko ng maayos.”
Amidst the fame and the success, Daniel said he keeps his feet on the ground and strives to be better as an actor and as an individual. “Basta trabaho lang ako at dasal at talagang maging mabuti kang tao.”
Last Sunday, September 1, 2013, to bond with his fans, Daniel joined Got To Believe’s colorful fun run activity in Aseana Park, Paranaque City. The young star said that he’s not used to running, but he’s active in sports like basketball. “Di ako mahilig tumakbo pero nagba-basketball ako,” he said. The young actor was ecstatic when he first learned about the fun run. “Idea ng [staff] ‘yun, ng malaman kong may takbo, game ako kasi masaya.”
Daniel was joined by Kathryn Bernardo and the rest of the Got To Believe stars. They gamely ran with their fans and had fun being sprayed with colored  water/powder along the three-kilometer running trail. The venue was packed with thousands of fans who went all out to support of their idols’ activity. Participants were provided with kits upon registration. Part of the proceeds of the event would go to a foundation.
Celebrity