Sam on reported 'pambabakod' with Jessy: 'Ako as a guy courting a girl, I just want her to know my interest. [But] me being around her doesn't mean na binakuran ko siya' 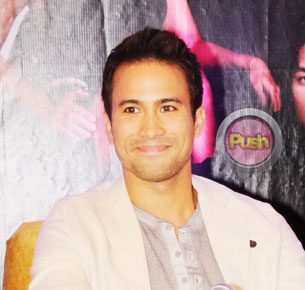 Sam Milby clarifies that he and Jake Cuenca don’t have any friction because of his courtship of Jessy Mendiola.
Aside from the glamorous ensembles of the celebrities, what many probably look forward to seeing every year at the Star Magic Ball are the couples who would arrive and leave together as well as those who are on the outs with each other. Sam Milby and Jake Cuenca reportedly had some friction that night.
Rumor has it that at some point during the cocktails held after the Star Magic Ball at Fairmont Hotel in Makati last September 7, Jake was reportedly seen eyeing Sam sharply while the latter was speaking with Jake’s Maria Mercedes co-star, Jessy Mendiola.
Jake’s reaction supposedly stemmed from the fact that Sam went overboard in shielding the Maria Mercedes star from other guys during the event, something which the singer-actor adamantly refuted during the story conference of Kimmy Dora 3: Ang Kyemeng Prequel held at Cerchio Restaurant on Tuesday. “Hindi, hindi ko naman gagawin yun. But everyone knows that I announced that I am making ligaw sa kanya... Ako as a guy courting a girl, I just want her to know my interest. Me being around her doesn’t mean na binakuran ko siya, it’s just that I want to be around her,” clarified Sam.
He added, “There’s no issue between Jake and I. There’s no issue between any other guys. Yun lang.”
A couple of weeks ago, he may have announced that he’s courting Jessy but now, Sam has opted to be tight-lipped as to the “progress” of his efforts. “You know I’ve already said what I needed to say. I’ve already admitted na nililigawan ko siya but in terms of other details it’s not really something that I can tell. Okay na, I’ve said na what I needed to say and people know na but that’s all that I can tell you,” he explained. “Yeah nililigawan ko siya and marami naming nanliligaw sa kanya.”
Meanwhile, another thing that got the public buzzing about him recently was why he arrived at the recently concluded gathering sans Jessy. To this, the Fil-American singer explained during an interview at the Star Magic Ball red carpet that it was a “mutual decision” for them to go solo for the event.
Another thing that the press pointed out was that he and Jessy appeared to be both caught off guard by his admission of his plans to court the actress. “Well I was a bit caught off guard but when the question came up kasi,” Sam confessed. “Wala, I wanted to be honest naman. I think when sometimes people see us out, I want to be honest.”
Kimmy Dora 3
Coming right on the heels of his top-rating soap Huwag Ka Lang Mawawala with Judy Ann Santos and KC Concepcion, Sam is now off to do his first ever Metro Manila Film Festival entry: the third and last installment of the highly-successful Kimmy Dora series.
Taking on the role of Rodin, the new love interest of twin sisters Kimmy and Dora Go Dong Hae played by Eugene Domingo, Sam revealed that he is a fan of the internationally-acclaimed actress which is why he gladly took on the project. “I’m a fan of Ate Uge, since the first one, she really deserves itong success niya dahil napakagaling [niya] talaga,” he said.
While he’s thrilled to be part of the action-comedy film, Sam shared that he’s also a bit anxious it given the fact that he would be expected to live up to the amazing performances of Zanjoe Marudo and Dingdong Dantes, who took on the roles of Kimmy and Dora’s love interests for the first and second films, respectively. “Any project you do, laging may konting kaba. You can’t avoid that. I’m more excited kasi it’s easier for me kasi [successful na yung franchise] mas nakakatakot for me if ito ang first part. Ito successful talaga yung two other movies eh, so you can expect people to watch because they like the first two,” he enthused.
Produced by Spring Films, catch Eugene Domingo, Sam Milby, Angel Aquino, Ariel Ureta, and Joel Torre in Kimmy Dora 3: Ang Kyemeng Prequel at the Metro Manila Film Festival this coming December.
Celebrity