Judy Ann on her positive aura: 'Parang sa akin, ngayon I just know where I am right now and at the same time ine-enjoy ko na lang lahat' 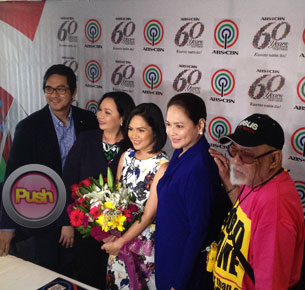 Despite claiming that she’s already open to consider offers from other networks during her last interview, Judy Ann Santos claimed that she, as well as her manager, Alfie Lorenzo, didn’t really welcome talks with other networks during the time that she was working out a new deal with ABS-CBN.
“[Baka] at the end of the day parang hindi rin naman pala magiging okay. Parang doon kasi lumalabas yung usapan na ‘ah nasilaw sa ganito.’ Para sa amin, ‘Doon muna tayo makipag-settle sa unang option,” Juday rationalized during the contract signing event for her new show “Bet On Your Baby” on Wednesday at the ABS-CBN compound, “Kung hindi matuloy oh eh di tsaka tayo pupunta sa ibang option.”
The reason Juday revealed was because she didn’t want her credibility as an actor to be tarnished.
“Ang pangit naman ng magiging dating ko sa mga network producers diba kung lahat sila kinausap ko tapos wala naman akong tinupad na usapan,” she explained.
So is it safe to say that Juday wasn’t blinded by the promise of a plumper purse by another network?
“Mukhang hindi naman,” she said with a loud guffaw.
Contract renewal
The prized Kapamilya actress did not disappoint her legions of fans after deciding to renew her contract with her mother network of over two decades.
The contract signing was attended by the network’s big bosses such as CEO Charo Santos-Concio, Broadcast head Cory Vidanes, Head of TV Production Laurenti Dyogi, and Judy Ann’s manager Alfie.
Included on her new, two-year contract with ABS-CBN will be her upcoming show “Bet On Your Baby, “ another reality show, and another soap.
Just last month, rumors of Juday jumping to another network sprung due to a rumored misunderstanding with the network with regard to the timeslot of her recently concluded, advocacy-driven soap “Huwag Ka Lang Mawawala.”
But all of those controversies are now behind her as a palpably positive Juday addressed the crowd during the event and reiterated how she made do with her previous statement that ABS-CBN, her second family, would still be her first option.
“The last words naman that I said during the press conference diba ABS would always be the first option. With regard to the talks na mangyayari if in ever sa other networks andiyan naman kami para makinig but you know since I’m a Kapamilya, hindi ko naman pwedeng itanggi na first option will always be ABS,” she explained about her decision.
While she recognizes and appreciates the staggering offers of other networks, Judy Ann, as with previous interviews, underscored that not every career move boils down to money. All things considered, the 35-year-old seasoned actress believes that it’s best to be part of a network that knows her worth not only as a person but also as an actress.
“Well, hindi naman ako magpapaka-plastic lahat naman tayo kailangan naman tayong kumita ng pera hindi ba. Pero at the end of the day siyempre iisipin mo rin kung ano ba talaga yung mas makakabuti sayo and at the same time saan ka ba magiging masaya,” said she.
Catch Juday on her upcoming reality show “Bet On Your Baby” at ABS-CBN.
Celebrity