Philip Salvador says he will be doing a film again if the script is right for him. 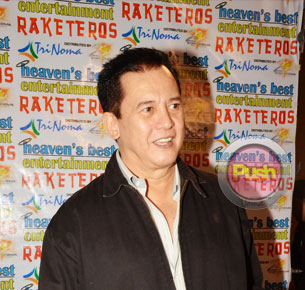 For Philip Salvador, if the script is good and right, he would commit himself into doing a film again. “[Gagawa ako ng pelikula] pagka merong magandang script na mapa-aksyon, mapadrama o kung ano man. Ganon, basta maganda,” he remarked.
The actor was sighted during the premier night of the comedy movie Raketeros last Tuesday, August 6, in Trinoma. Philip shared that he was excited when he first learned that his friends are doing a movie project together.
”When I found out about it through Dennis Padilla, magkakasama daw sila ni Herbert Bautista, ni Andrew E., ni Long Mejia and ni Ogie Alcasid eh sabi ko hilarious ‘to sigurado,” he said. He was more thrilled when he knew that Randy Santiago was directing the movie. “And director pa si Randy (Santiago) eh lalo na alam mo naman na comedian din yan,” he added.
With Star Cinema celebrating its 20th anniversary, the actor relayed how honored he is to be part of the movies of the film outfit. “Well I’m honored that isinama ako ng Star Cinema, truly honored about it,” he stated.
Philip also conveyed how thankful he is to Piolo Pascual, Gerald Anderson, Joel Torre, and the rest of the members of Star Cinema’s upcoming offering titled OTJ (On the Job) for bringing back an action movie to the big screen. “Don sa mga pumapasok sa action ngayon, I’m very happy and thankful to them kasi gusto nilang matulungang ibalik ang action.”
On his advice to all the budding action stars of this generation, Philip said, “Maging natural lang sila, huwag lang ‘yung action na in-action lang nila, para mas maging realistic.”
On his personal life, Philip shared how proud he is of his son Josh as the latter has gotten fitter now. He thanked Kris Aquino for such an amazing job of taking good care of their son. “Of course I’m very happy with my son and I’m very thankful to Kris,” he briefly commented.