Gary Valenciano says he is not closing his doors on acting again. 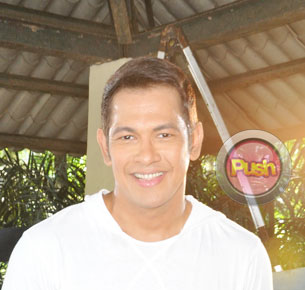 This year has proven to be a pivotal one for Gary Valenciano as he turned 50 last August 6 and recently signed on with The Filipino Channel (TFC). “Ang pinirmahan ko ay para maging official na magiging part ako ng TFC ng ABS-CBN. So yung lahat ng mga TFC subscribers sa buong mundo sana magkita kita tayo sa iba’t ibang pangyayari like concerts, programs, infomercials and pati na rin mga theme songs na we’re going to be making for Pinoys all over. So these are some things I’ll be doing,” he said.

Gary said he looks forward to meeting Kapamilya fans all over the world who he knows are very welcoming. “Think about it this way, basta may pumuntang mga Kapamilya sa mga shows abroad, I think sa ngayon like I think right now yung Please Be Careful With My Heart is on tour, I think yung pagtatanggap sa kanila is very warm,” he added.

The talented performer, who is also popularly known as “Mr. Pure Energy,” said he also looks forward to visiting new countries because of TFC. “There are countries in Europe na hindi ko pa napupuntahan. Halos lahat napuntahan ko na pero yung mga iba’t ibang cities na hindi ko pa napupuntahan na alam kong may mga TFC subscribers like I’ve only been to Boston once pero alam kong may mga TFC subscribers dun. I believe that there places I can still go to in Australia and I base this on sa mga feedback na nakukuha ko sa Twitter pag pinapanuod nila yung ASAP. I think that there’s still a lot that I can contribute as an artista and as a spokesperson now for TFC,” he explained.

When it comes to acting on the big screen, Gary admitted he is open to it as long as he finds a good role to portray. “Well I did a musical last year called I Do Bidoo Bidoo and that was basically my first step to coming back. Yes my doors are very much open para gumawa ng pelikula ulit pero pagpipilian ko ng mabuti kung ano ang mga roles na gagawin ko because I think that there’s been maturity in the past years to do roles na hindi inaakala ng tao na gagawin ko, pero roles that will really create an impact on people’s lives. Not just in the ratings, not just in the reviews, but in people’s lives. I think that in this point in time, I think that it’s perfect to come out with that,” he explained.

The talented performer said he does not want his singing career to suffer which is what can happen if he accepts a teleserye project. “Yung pag teleserye kasi may mamamatay eh. And that would be the concert, my being able to go abroad. Matatamaan talaga yan, maka-cancel talaga yan. Plus may ASAP pa. As it is now, I leave for two weeks then I have to come back after two weeks dahil my commitment to ASAP. As one of the seniors, I need to set a good example also to the others who are part of the show. So I live up to that. So ngayon, pag may teleserye nakikita ko rin sina Coco Martin, how easy for him to be so popular, how easy for him to actually be a part of ASAP. Kahit as isang host or numbers once in a while. but it’s very hard for someone like that. very rare talaga na magkakaroon ng ganun. Even Maja (Salvador) and si Kim (Chiu), it’s very tiring and I think that with my health condition and all, siguro I’d like to continue doing just being on tour and then gagawa din ako ng mga theme songs and then maybe movies,” he admitted.

After turning 50 and celebrating his 30th showbiz anniversary, Gary said he has set new goals for himself both personally and professionally. “I hope I can do newer projects na hindi lang music. Actually sa music meron din akong mga surprises now. It’s also my 29th wedding anniversary. It’s an exciting time for me because meron pa talaga akong nais matupad. But its not maybe for me anymore, siguro yung ideas ko puwede kong ibigay para naman sa ibang mas bata, yung mga kabataan na sila ang mag-e-execute and it feels good to be able to do that. So musically medyo mag-iiba din yung tunog ko. When the projects are ongoing na, I will really make you know. It’s very interesting. For 30 years, I'm coming up with certain items na sana magustuhan ng tao. There’s going to be a book that will come out with 30 of the most outstanding lessons that I’ve learned in this industry. Anything that has to do with the mind, the heart, the body, the soul, the spirit, all of those will be in one book that will come out by the end of my 30th year which will be April next year. That’s one. There's merchandise that’s coming out also, maliban sa CDs na ilalabas, may mga online videos and online programs na lalabas din, all a part of the 30th anniversary. Something very interesting that I want everyone to see,” he revealed.

Catch Gary Valenciano on ASAP and in his weekly show Tuesdays With Gary,” starting August 6 and every Tuesday of the month at Teatrino, Greenhills. For more Kapamilya updates, log on daily to Push.abs-cbn.com and follow Push_Mina on Twitter and Instagram.