72 Kalokalikes gather in a grand presentation

72 Kalokalikes from 'It's Showtime' walk the red carpet. 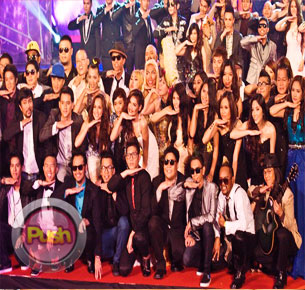 Seventy-two Kalokalike contestants from It’s Showtime graced the red carpet for a presentation last Saturday, August 24, 2013, at ABS-CBN’s Dolphy Theater. Contestants who made it to the semi-finals spoofed local and international celebrities.
The entertainment press and the guests had major laughs during the event. The Dolphy Theater was packed with kalokalikes of Hollywood celebrity like Nicki Minaj, Lady Gaga, Mr. Bean, Usher, and a whole lot more. The It’s Showtime hosts also had their kalokalikes as well, like Anne Curtis, Vhong Navarro, and Billy Crawford. Local stars like Jake Cuenca, Sarah Geronimo, and Bamboo were also spoofed. Even broadcast journalist Noli De Castro and president Noynoy Aquino had lookalikes.
On why they joined the competition, some contestants responded that it’s because they want to help their families. Others joined the contest for the experience and to share their talent.
Each day on It’s Showtime, a group of kalokalikes will have their face-off to secure a slot in the grand finals on September 21. Prices at stake are 300,000 pesos for the grand winner, 200,000 pesos for the first runner-up and 100,000 pesos for the second runner-up.
Watch out for “Kalokalike Face 2” in It’s Showtime from Mondays to Saturdays on ABS-CBN. For updates on the program, follow @ItsShowtimena on Twitter or like www.facebook.com/itsShowtimena. To watch the previous “Kalokalike” episodes, visit showtime.abs-cbn.com.
Celebrity