Phil Younghusband admits girlfriend Angel Locsin inspires him to be a better person. 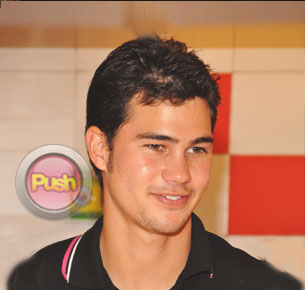 All ready for his charity football match this weekend, Phil Younghusband said he is hoping to replicate the big 5-1 win Team Phil had over Team James during the inaugural Clear Dream Match last year. International soccer legends Dennis Wise and Fabio Cannavaro also flew in to help mentor the two teams. Phil said he hopes the event will be even more exciting this year. “I hope so. I think this game is going to be a lot closer than last year. Having Fabio and Dennis here is going to make it more interesting and I think James (Younghusband) is up for revenge so I think he's a lot more prepared this year (laughs). So I think it will be a lot more interesting this year,” he told Push.
The yearly charity football match will benefit the victims of typhoon Maring and the Tuloy foundation of Don Bosco. The 26-year-old athlete said to have former Chelsea football captain Dennis Wise on his team is like a dream come true. Phil started out his football career as one of the top scorers in the Chelsea football club's youth team and he was a fan of Wise even then. “It's amazing. It's something that I can be proud of and tell all my friends and family, to play with Dennis is something that I was really looking forward to and something that as a kid I aspired to be like him, I aspired to be in the first team (in the Chelsea football club in England) and be a professional like him. So the chance to play with him is something I really wanted to do and I hope to learn a lot from him,” he admitted.
During the onslaught of typhoon Maring, Phil said he was thankful to still be able to be with all his loved ones. The Fil-Brit model said Maring was the second major calamity he has experienced in the country after typhoon Ondoy in 2009. “During this typhoon, I was with my family and with Angel (Locsin). Luckily I was able to get out of the village and be able to travel a little. I got to see family and friends,” he said.
Phil said that his girlfriend was one of the most vigilant celebrity volunteers during the floods. “She's on a different level. She's so hardworking. I think all she's been doing these past few days is donating, she's packing stuff, distributing, coordinating; she's doing everything. She's really an inspiration to everyone. She's a leader and just by leading by example, people follow what she does and she's a positive influence on everyone. She's like that with me. When I'm with her, I want to help more and be able to give back more. She really is someone that affects people in a positive way. I'm lucky to have that person in my life,” he admitted.
Although he was not able to join her in volunteering at relief centers, Phil said Angel never made him feel bad because she knew he was also busy preparing for the charity match and football clinic for Tuloy foundation. “She never puts pressure on me to go with her. She leads by example and by what she does, it makes me want to follow her and do good stuff. She understands everything I do and she understands that this event coincides with the recent floods and 50% of our ticket sales will go to the flood victims and we were in Don Bosco's Tuloy foundation distributing relief goods to the victims,” he explained.
Although many might speculate why Angel will be absent in this year's Clear Dream Match, Phil explained it has nothing to do with their personal status. “It's because she endorses a different brand (of shampoo),” he said.
Apart from gearing up for the start of the United Football League (UFL) as part of the Meralco Sparks this coming October, Phil said he and the national team will also be busy preparing for the Challenge Cup in March 2014. “If we win there we get into the Asian Cup which is a big deal. So up until March we'll be training for the Challenge Cup and we'll have exhibition games and games with my local club so we're looking to be in the right shape and do well in the Challenge Cup which is important,” he said.
Despite his busy schedule, Phil said he and his brother James always have time to coach their students at the Chelsea Football Academy in Paranaque. “I usually train in the mornings and then in the evenings we have the coaching with the kids so me and James have our hands full with that. We like to be with the kids and teach them. That's all year round and that's three or four times a week on evenings for a couple of hours so that's something we'll continue to do,” he added.
For more Kapamilya updates, log on daily to Push.com.ph and follow Push_Mina on Twitter.
Celebrity