Bamboo and Yeng Constantino rock the Big Dome with 'BY Request'

Bamboo and Yeng Constantino perform to a sold-out crowd at the Araneta Coliseum in a first time concert collaboration. 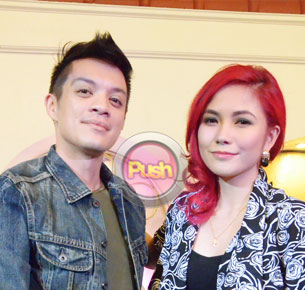 Bamboo and Yeng Constantino set the Big Dome on fire in their first collaboration concert titled BY Request last Saturday, August 17, 2013.
The concert started off with Bamboo singing one of his greatest hits “Hallelujah” and Yeng serenading the crowd with “Hawak Kamay.” The show progressed with performances showcasing their versatility as they sang their own renditions of ‘80s and ‘90s classics. Then, a duet of Yeng’s chart-topping song “Pag-ibig” followed which instigated louder screams and cheers from the concertgoers.
Everyone was caught by surprise when Bamboo sang some famous Broadway songs. The singer’s artistry truly shined through during his performances. Bamboo also sang ballads like “When I was Your Man”, originally by Bruno Mars and “214”, his hit song with former band Rivermaya, which according to him is “the song where it all started.”
Meanwhile, Yeng wowed the crowd with a soulful performance of the song “You Make Me Feel (Like a Natural Woman)” by Aretha Franklin. She confessed that it’s always been her dream to sing it in a show. She also belted out Adele’s “Set Fire to the Rain” and “Girl on Fire” by Alicia Keys. She also performed her current smash hit “Chinito” with a cute choreography in line with the playful tune of the song.
More jaw-dropping performances took place as the concert drew to a close. They also performed their chart-topping rock songs with the jam-packed crowd singing in unison—a testimony to their success and influence as rock singers. Most of the songs they performed were from the requests sent by their fans sent in via their Twitter accounts. The show capped off with Bamboo and Yeng performing U2’s “Beautiful Day”.
In a backstage interview after the concert, an ecstatic Yeng expressed how honored she was to be paired with Bamboo for a show. “It’s an honor for me to play with him here in Araneta. Sobrang saya ko, hindi talaga ako kinabahan kanina kasi sobrang excited lang kami and we’re really happy na napull-off namin ‘yung standard na gusto naming gawin which is unforgettable and sobrang excellent na show,” she said.
She never expected that the Big Dome would be as full as it was. “Sobrang nagpapasalamat kami sa lahat ng taong pumunta. We are so happy, maraming maraming salamat. Sa totoo lang po hindi ko po inaasahan na mapupuno ang Araneta. Sobrang thankful ako kay God kasi nong lumabas kami sobrang daming tao,” she stated.
A celebratory Bamboo shared that the show took a lot of planning and he was personally part of the preparations. “I pick the arrangements para may kwento siya, so very ambitious,” he relayed. He said that he’s glad to be working with Yeng because he learned a lot through the entire process. “Yeng is actually great and I learned so much from this show. I’ve learned a lot from Yeng also, how she sings. It’s an awesome feeling,” he stated.
Celebrity