Xian Lim: 'I discovered na there are people na who are willing to help me out'

Xian Lim says that there are a lot of people who are willing to help him so that he can be at his best while filming 'Bakit Hindi Ka Crush ng Crush Mo. 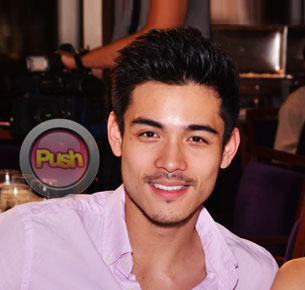 Xian Lim was overjoyed with the success of his first big screen team-up with Kim Chiu. “Naisip ko lang ngayon na overflowing happiness sa sarili ko dahil we gave our best shot and we gave it all our hearts,” he remarked during the thanksgiving party of Bakit Hindi Ka Crush ng Crush Mo.
The actor added that their hard work truly paid off and it felt good to be celebrating because everything turned out to be great. “We’re all celebrating and it feels good na tinggap siya ng lahat,” he stated.
Xian attributed the box-office success of the movie, not only to his tandem with Kim, but also to the efforts of the whole team of the film. “Para sa akin din [it’s successful] dahil sa buong team ng Bakit Hindi Ka Crush ng Crush Mo, from the director, to the whole staff and the whole team.”
He thanked all their supporters, especially those who had block screenings for the movie. “Siyempre ‘yung mga sumuporta din sa amin, ‘yung mga nagpa-block screening, meron pang iba na hindi pa kami kilala ni Kim pero pinanood nila, so maraming maraming salamat at sa trust din ni Kim sa akin.”
The chinito actor remarked that the movie made him realize that there are a lot of people who are willing to help him so that he can be at his best as an actor. “I discovered na, on a personal level, na there are people na who are willing to help me out and are willing to be just there for me,” he said.
Is he open to do another movie with Kim? “Para sa akin kung ano man ang ibibigay sa akin ng management don ko nilalagay ‘yung buong taya ko eh, what’s going to be given to me, hopefully it will be good.”
Xian hoped that those who watched the movie would learn a lot about love that they could utilize in real life. “Sa lahat na tinaggap ‘yung character namin, sa lahat nong naka-relate ng pusong-wasak, sana magamit niyo ‘yung mga napanood niyo sa pelikula.” He also asked for the continuous support of everyone for his tandem with Kim. “At sana pasatuloy niyo pong suportahan kami ni Kim. Maraming maraming salamat po sa inyong lahat.”
Celebrity