Claudine has taken on the witness stand in the recently concluded hearing for the PPO she sought against estranged husband, Raymart 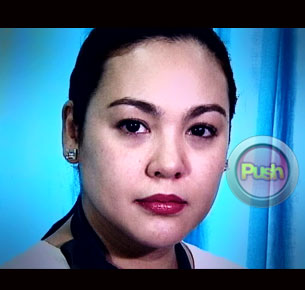 Actress Claudine Barretto wasn’t able to hold back her tears after the second hearing for her petition to make permanent a temporary protection order (TPO) granted to her last week against estranged husband Raymart Santiago last Wednesday.
For that hearing, Claudine took on the witness stand and underwent what she described as “a very draining” cross examination.
Like the first hearing, no media was allowed inside the Marikina Justice Hall when the proceeding took place but Claudine had her much needed support group through the person of her mother Inday Barretto and sister Michi.
After the hearing, a visibly distressed Claudine came out and assured the media nonetheless that she is "okay, fighting, hoping."
The two camps according to Claudine’s counsel Atty. Ferdinand Topacio is still under a gag order thereby making it impossible to really determine what transpired behind the closed-door proceedings.
But Claudine was able to express her gratitude to her ever supportive mother for taking the time to be with her.
"Syempre nagpapasalamat ako. Ayoko na sana siya madamay at pumunta dito because of her age and all, but I'm thankful, I'm really thankful sa suporta niya," she said.
Claudine likewise thanked her fans who have been continuously praying for her in her current battle.
“Sa lahat ng suporta sa lahat ng nagdarasal sakin, sa mga anak ko. Maraming maraming salamat nakakapagod pero okay lang. Kaya [pa],” she stated even adding that she is “palakas ng palakas.”
Meanwhile, asked what could have triggered the younger Barretto’s emotions during the proceedings, her counsel shared, "Nare-recall niya 'yung mga nangyari sa buhay niya eh, kaya gano'n. Hindi naman ako makapagsalita."
It may be recalled that the initial petition for the TPO stems from Raymart's alleged "physical, verbal, psychological, and even economical" abuse towards Claudine, something which the actor has vehemently denied.
A new schedule for the third hearing has yet to be set, according to Raymart’s counsels.
Celebrity