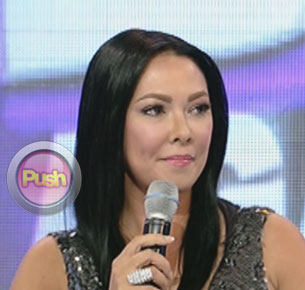 Fresh from London after her month-long trip, actress Ruffa Gutierrez happily shared the freedom that she was able to enjoy while taking her Secrets and Spies: Modern Espionage and Intelligence summer course at King’s College.
According to Ruffa during a live interview with The Buzz on Sunday, the idea was spawned by a lifelong dream to enter college, something which she wasn’t able to pursue in the past for she started very young in showbiz.
“With everything that’s happening now, no way. Sorry, first lady nalang ako pwede?” she joked when asked if her taking a short course was a prelude into eventually venturing into politics.
The former beauty queen described the course as “very fascinating” especially after the recent controversy embroiled in by Edward Snowden, a computer analyst for the US Central Intelligence Agency and National Security Agency who purportedly leaked details of several top-secret United States and British government mass surveillance programs to the press.
“Ibig sabihin nun we’re always being watched. Hindi kana talaga pwedeng magtago,” said the mother of Lorin and Venice Bektas.
Originally, Ruffa was supposed to take up International Political Economy as her summer course but decided against it because “I really wanted International Relations and Diplomacy, that’s more application. Yun it’s more of economics talaga with World Bank, GDP and a lot of numbers which is something, I’m sorry but I would really get bored with.”
Although she had a clear idea that she wanted to improve academically, Ruffa, being the people person that she is, never wanted to let go of the social side of being in college. Hence her side trips with friends over at Ibiza and France, among others, during weekends.
“A lot of people were saying, ‘Nako Ruffa nag-aral kaba talaga? We see you in Spain, in France. But that’s the beauty about being based in London, it’s like being in Manila, it’s only an hour away to go anywhere.”
“My classes were from Monday to Thursday, 9:00a.m. to 3:00 p.m. and Thursday were off na for the weekend so alangan naming study parin siyempre can I socialize naman?” she quipped with a laugh about her after class escapades.
But the question remains as to what really triggered her to finally set aside showbiz, fly to London and take up a summer course.
According to Ruffa, she originally went to Europe a month ago to shoot a magazine cover. After the shoot was over, she had an idea to stay and go on a tour for at least a week just to recharge.
“But, sabi ko this is the opportunity for me to really pursue what I really wanted to do. It’s not a master’s course it’s not university but you know this is my journey and even if this is just a summer course, [I believe] it’s a time well spent. Talagang hindi lang ako naglalakwatsa doon, talagang it’s knowledge na magagamit ko in the future, even if not for work,” she enthused.
Going back to school Ruffa said was the “best decision” she ever made saying that “It’s just something that you wanna keep on learning. It’s something that I wanna impart to my children, that education is really important.”
Funny enough, she shared that taking up a secrets and spies course she naturally didn’t share that much information about who she really was to her classmates.
“Nalaman lang nila nung last day na. Nung nalaman nilang two million ang followers ko [sabi nila] ‘Oh God who are you?’” shared the 39-year-old star who took on “007 Anoushka” as her spy name.
Having enjoyed her month-long, back-to-school experience, Ruffa said she’s actually considering to return next year to take up another course probably with some friends in tow.
Celebrity