Andi Eigenmann: 'Jake and I are not officially together'

Andi Eigenmann says that she and Jake Ejercito are 'better than ever' even if they are not officially a couple. 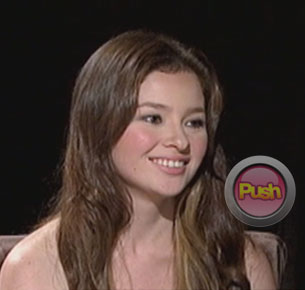 Finally, answering what is perhaps the most intriguing question about her personal life, actress Andi Eigenmann has clarified that the son of former president and current Manila mayor Joseph "Erap" Estrada to former actress Laarni Enriquez, Jake Ejercito is not her boyfriend.
Although she said that they are currently "better than ever,” Andi via an interview on "The Buzz" on August that they have both agreed to not put a label on their relationship saying that “Ever since the beginning naman po hindi ko alam kung ano po talaga ang dapat sabihin.”
Nevertheless, the “Galema” star underscored that she has been very vocal in saying that the young Ejercito is “special” for her and that she really “cares” for him.
But according to her, the subject of making their relationship official is not something that they have eluded. If anything, she said that they are just waiting for a perfect timing in their lives.
"Ang pinagusapan lang po namin is when we are ready and pagtama na po ang oras at tsaka siguro po magkakaroon ng label. Pero at this moment, sa tingin ko mga bata pa naman din po kami and may mga sarili ng bagay po kami na gustong pag-focus-an  like siya nag-aaral pa siya, ako po i'm focusing on my career and Ellie,” Andi said of what she and Jake has agreed on.
However, just because they are not official doesn’t mean that she has no right to feel jealous when certain women are being linked to Jake.
"Opo. Bakit hindi? I'm the jealous type and Jake also he's e jealous type so madali lang po para sa amin na maging honest sa isa't-isa,” she shared laughingly.
Of late, rumor has it that Jake has been dating “It’s Showtime” host Coleen Garcia. To this, Andi openly confessed that she initially harbored doubts towards Jake when the issue came out. But eventually she has chosen not to be shaken by rumors saying that, “Sakin I still trust Jake so whatever he says I believe.”
Meanwhile, having admitted that Jake was also the jealous type and with Andi on her way to making a TV comeback via a soap opposite Matteo Guidicelli, will their onscreen pairing be an issue to the young Ejercito?
"Hindi naman po. Matteo and I are awesome… We've been friends even before 'Agua Bendita' and in this industry I think isa si Matteo sa mga taong that kahit na hindi kami magkatrabaho eh kaibigan ko parin,” she declared.
To those who might think that a romance might brew between Matteo and Andi given that they are both single, the former “Pinoy Big Brother Teen Edition” housemate was quick to respond that “For some reason kahit na pareho kaming single ni Matteo, di niya raw ako type, oh sige, di ko rin siya type.
Celebrity