Jessy Mendiola on 'Maria Mercedes': 'They are going to see a different Jessy'

Jessy Mendiola shares that she will be showcasing a different side of her in 'Maria Mercedes.' 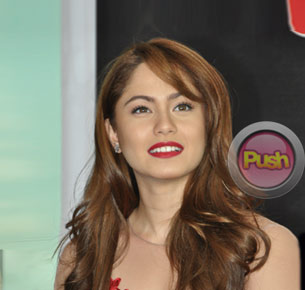 When asked how it feels to play the iconic character Maria Mercedes in the series of the same name, Jessy Mendiola remarked, “We all know Thalia (the former Maria Mercedes) is very sensual but at the same she is very sweet, bubbly and fun so I feel really pressured but excited at the same time.”
She added that playing the role has allowed her to showcase a different side of herself. “They are going to see a different Jessy. I mean Paraiso was already different but this one is really different, like a whole lot different,” she said.
Just like Thalia, Jessy sang the theme song of the upcoming teleserye. The actress relayed that she doubted if she could pull it off, but she decided to embrace such a rare opportunity. “I think I’m not a good singer but I sing KTV songs and when they first asked me to sing the theme song I felt pressured and scared, like, ‘Me? Are you sure you want me to sing this song?’ I mean they said, ‘Thalia is like that so we want you to be the first ever lead girl who could sing your own themes song,’ so we did that.”
The actress relayed that she did a workshop to embody Maria Mercedes perfectly. “It’s more of a sensuality workshop. They want me to be, well, we all know Thalia is very sensual and they want me to work on that. Ako naman kasi I’m not that sensual in real life,” she shared.
Despite having a tough time at first to demonstrate sensuality, Mr. M (Johnny Manahan) gave her a piece of advice that helped her personify the role in her own way. “But Mr. M said that being yourself can be sensual already, like someone sitting in a chair, she can be attractive by seating in a chair. Or like for example Anne Curtis, wherever she goes on TV and she laughs, she’s really sensual like that, and I think that’s better. Just being yourself, your sensual self,” she said.
Celebrity