Patrick Garcia on his inspiration: 'Every time I see my kids I want to do well'

Patrick Garcia says that his kids are his major source of inspiration in work and life. 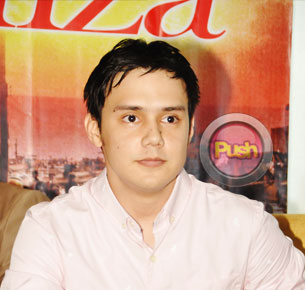 Patrick Garcia said that fatherhood has changed him in many ways. In an exclusive interview with Push.com.ph, the Annaliza star shared, “It changed me a lot. It changed me how I do life, it changed some things about myself so that my kids could live well.”
He relayed that his children are his inspiration in life and said that they are the reason why he works so hard. “[I draw inspiration] with my kids. Every time I see my kids I want to do well because I’m working for them and for their future.”
Having his kids around is also a source of joy for Patrick. He remarked that he is happy at the moment and he’s hoping for some showbiz issues to be resolved so that he could continually move forward with his life. “I’m very happy of course, but I could be happier naman. To be happier I hope ‘yung some issues na hindi pa natatapos in the future maayos din ‘yun lahat.”
Is he ready to commit to marriage? “Actually I could be ready now, but we’re waiting for our daughter to be old enough to walk so that she could be a flower girl,” Patrick said. Patrick has a daughter with his current non-showbiz girlfriend. As of this moment, Patrick’s priority is to save for the future and be financially stable before he ties the knot. “For now work muna, ipon muna and then [marriage] will come.”
With the success of his teleserye Annaliza, the actor said he is thankful that it’s doing well. Did he expect that Annaliza could turn into a massive hit that it is right now? “Well I didn’t expect [it]. In any show naman we do of course, we wish it the best. If it’s a hit, then we’re happy. If it’s not, then we try harder.”
He shared that he could relate to the role he is portraying in the show. “In my personal life I’m a father myself so nakaka-relate naman ako ng konti. Nakaka-relate ako sa character ni Lazaro sa totoong buhay by being a father.”
The actor has nothing but good words for Denise Laurel who plays his wife in the soap. “She’s a very good actress and we’re very comfortable [with each other],” he said. On Andrea Brillantes who plays the main lead, Patrick said, “She’s very good and very talented, very sweet and very nice to work with.”
Celebrity