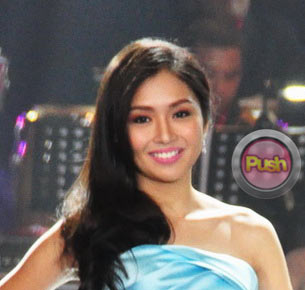 A lot of people couldn’t help but notice that Kathryn Bernardo seems to be following the footsteps of bankable star and teleserye princess Kim Chiu. They both have the same sweet and wholesome image to begin with. But aside from having a similar career path, Kathryn seems to be going through the same intrigues that Kim experienced in the past. For one thing, the 17-year-old has reportedly become anorexic even though she already has a slim figure. “Talaga? Hindi. Feeling ko iba naman, mas mataba naman ata ako. Ganon kasi talaga built ng katawan. And sabi nila sa TV sakto lang talaga siya. So I don’t know [why they accuse me of such]. Hindi naman ako nagpapapayat,” she said in an interview.
As a matter of fact, Kathryn’s one vice when she’s at work is that she has a big appetite. Even way back during her Mara Clara days, she and co-star Julia Montes were often teased for their love for food. Kathryn’s just fortunate that she doesn’t easily gain weight even though she has a sweet tooth. “Usually, ang rainy must have ko sa set ay…pwede food? (laughs). Gusto ko ng chips and chocolates. Hindi yun mawawala kapag taping. May cooler ako na puno ng chocolates and mga baon ko, yun ang energy booster ko.”
Kathryn also addressed the circulating rumors that she probably had a nose job because of a noticeable change in her facial features. The young actress, however, didn’t seem offended by the malicious issues being thrown her way. “Oo sa ilong daw. Hindi po talaga, mamatay man ako. Siguro lang, as I grow older, nagbabago ng pakonti-konti. Pero kung sa inayos, wala.” Aside from the fact she’s too young for it, Kathryn stressed that she’s not interested in enhancing any part of her body through cosmetic surgery.
Celebrity