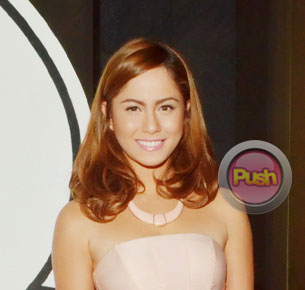 Jessy Mendiola was honest enough to say that she felt awkward when she first learned that she would be working again with Matteo Guidicelli for their endorsement for the Line phone application soon after they decided to cut off their supposedly growing romance. The pretty actress had opened up about it when she had a press con for her next teleserye, Maria Mercedes. A few weeks after her revelation, she was offered to do an ad campaign with her former Paraiso leading man. “Nagulat ako, hindi natin ine-expect. Siyempre merong [awkwardness],” said Jessy who reportedly deleted all her photos with Matteo as soon as they decided that they were better off as friends.
But Jessy obviously set aside whatever misgivings she had about it for the sake of work. “We’re coworkers so hindi naman talaga maiiwasan na magkasalubong. Maliit lang ang mundo… Nagulat din ako na makakatrabaho ko siya. [Pero] yun nga, sabi niya we’re very used to each other.”
As previously reported on Push.com.ph, Jessy admitted that the reason they decided not to pursue a romantic relationship was because they wanted to prioritize their respective careers. “Napagdesisyonan na naming dalawa na mutual na trabaho na lang muna. Pero I’m not closing any doors kasi we are friends naman ni Matteo. Happy din ako para sa kanya kasi ang dami niyang trabaho ngayon. Kung pagsasabayin pa namin lahat baka mabaliw pa siya at mag-run, swim at bike na siya away from me.”
During the press con of their endorsement, Jessy chose not to further talk about the issue with Matteo standing beside her. “How awkward! Mamaya tayo mag-usap,” she jokingly told Matteo before finally cutting off the interview with the entertainment media.
Celebrity