Jasmine Curtis on the real score with Sam Concepcion: 'A lady shouldn't be the one defining it'

Jasmine Curtis says her family approves of Sam Concepcion, but refuses to confirm the status of their relationship. 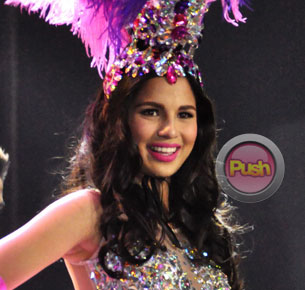 “A lady shouldn’t be the one defining it, especially to the public,” were the words that Jasmine Curtis uttered when asked about the real score between her and Kapamilya star Sam Concepcion. Although they’ve been rumored to be an item for a while now, the singer-actor has always been elusive when it comes to his love life. “Whatever status he says it is and claims to the press, then I will say my part once he has done his. It’s much better that way,” said the pretty younger sister of Anne Curtis.
Anne previously mentioned that Sam was present during a family dinner for Jasmine’s birthday, which is an indication of how close the young actor-singer has become to the Curtis family. Jasmine merely confirmed though that her family’s open to Sam courting her. “I’m just happy. He’s such a great guy. He's intelligent, caring... I’m happy they’re very supportive. If it was any other guy, they would be the same. At first it might seem that they’re not okay kasi siyempre I’m a girl. They want the boy to work for my attention. They know how much a girl gives in a relationship.”
It was Anne who actually advised Jasmine to separate her private life from her showbiz career as much as possible. “It’s such a private part of who I am, who he is. When it comes to personal matters, not even just romantic relationships, even if it’s a family matter, I would prefer to keep it private, learn how to handle it in my own little world.”
Asked if it is hard to have a boyfriend from the same biz, she safely replied, “I wouldn’t know yet. I guess it would be considering that we’re from different networks. It would be hard for our fans. Maybe it will also cause conflicts from projects. I’m hoping more than anything if whatever, it shouldn’t be a cause for any negativity.”
The good thing about having Sam as a suitor though is that they’ve been friends for a long time now. “I met him 2006 or 2005 in the hallways of ABS-CBN. ‘Hi-hello, I’m Jasmine...’ And ever since then, every time I would visit and go to ASAP with my ate, I would see him and we’d talk. Matagal na kaming friends. The friendship has always been there.”
Celebrity