Cast members of the popular US series 'Glee' admit they are excited to visit Boracay for the first time. 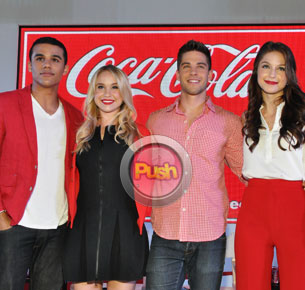 Some cast members of the popular US series Glee arrived in the Philippines this week to help unveil the newest product of Coca-Cola. Melissa Benoit, Jacob Artist, Dean Geter, and Becca Tobin were all excited to be in the country as revealed in their presscon last June 7 at the Peninsula Manila hotel in Makati City.
“This is actually my very first time overseas, ever. I’ve never been outside of America so I’m just really excited. I’m excited to see a lot of nature. I‘ve never really spent a lot of time in tropical countries before so I’m excited to see that,” admitted Melissa who plays the lovable and shy Marley in Glee.
Jacob, who plays Marley’s boyfriend Jake in the show said he is excited about eating Pinoy food at Jollibee. “I need to try this. I’ve heard so much about it. It’s like the McDonald’s of the Philippines,” he shared.
Becca, who plays the role of manipulative cheerleader Kitty, said she can’t wait to meet the Pinoy fans of the show. “I’m most excited about the fans because we got a lot of people on Twitter reaching out and I have to say the Filipino fans are the best. They’re so enthusiastic. They’re always friendly, they never threaten me unlike the Americans and I appreciate it (laughs),” Becca joked.
The Glee cast also had nothing but praises for Filipino performers Charice and Jessica Sanchez who had performed as guests on separate episodes of the show. “They are so unbelievably talented it’s crazy. Charice and Jessica Sanchez are some of the best vocalists the show has ever had so it’s an honor to work with them,” said Jacob.
Melissa said she can’t forget taping the episode with the Americal Idol standout. “There was a moment when we were shooting when Jessica Sanchez started to sing her song live and just kind of stripped down version of the song and everyone just went quiet. And stopped to listened to her. She was amazing,” she recalled.
Dean also admitted he had heard of Charice even before she made a guest appearance on the show. “I didn’t get to work with them but it was amazing watching them. I watched Charice on Oprah and I was blown away. She was pretty young back then but just from listening to her voice back then you know that she was going to at least do something, get signed to a major label and release an album. I like her new hairstyle,” he said.
During the event, they were asked to share what things made them happy in line with Coca-Cola’s theme of spreading happiness. For Dean who plays Brody in the series, it’s when he is performing. “My passion and my real happiness is when I’m on stage playing my music and I think that goes hand in hand with spreading happiness,” he shared.
Becca said happiness is keeping things positive. “I think happiness is pretty contagious. I find that if I wake up in the morning and I start my day really happy, then everybody that I come in contact with usually they get a little happier. Kill them with kindness,” she said.
Melissa said her pet is the answer. “Mine is pretty simple. Any time I’m with my dog I feel really happy and she makes other people happy.”
Jacob, who plays a bad boy on the show, said he shares his character’s adventurous spirit. “I’ve really kind of been interested in doing new things in life whether it’s traveling or things that I normally wouldn’t do so I think being here in the Philippines and experiencing all this with these guys, my happiness has opened for sure,” he added.
The Glee cast members will be joined by Coca-Cola ambassadors Kathryn Bernardo, Julia Montes, Enchong Dee, and Joseph Marco during the June 8 unveiling at Ayala malls all over Metro Manila. After the event, the four actors will be flying to Boracay for a short vacation before they start shooting for season 5 of Glee in July.
For more Kapamilya updates, log on daily to Push.com.ph and follow Push_Mina on Twitter.
Celebrity