Zsa Zsa Padilla cringes at the idea of falling in love again: 'For now it's kadiri for me' 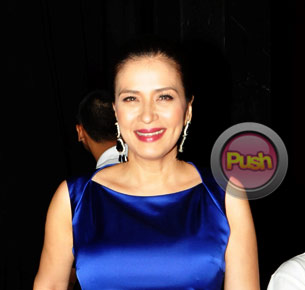 Zsa Zsa Padilla marked her 30th year in the music industry with her latest album titled Palagi (Noon, Ngayon, Bukas, Kailanman…), which speaks of different journeys of love. Composed of eight original tracks and two revivals, the Divine Diva said she is thrilled to contribute to the local music scene once again. “This generation now is the generation that multitasks. That’s probably why to some it’s hard not having to hear a familiar tune. So we try to gather all the commercial melodies that we could that are easy to latch on to. It’s a little harder to get out there but I think it’s a chance I have to take for OPM (original Pinoy music),” she said in an interview with Push.com.ph at her album launch last June 4.
Zsa Zsa further shared that she first recorded all the sad songs in her album since she could easily relate to it. “All Cried Out” is a song which she wrote three years ago for her daughter Zia Quizon who was going through her first major breakup at the time. “Sobrang down siya nun. She's very young but at that stage in your life you think you cannot recover from it. That’s how you feel at the moment. Of course eventually she did. But at that time I said, ‘Okay, I want to write you this song, ‘All Cried Out,’ mauubusan ka rin eventually, you start to feel numb. It’s a process that you really have to go through. When you see your children go through phases like this, Karylle also, it’s hard eh. You know that they have to go through life experiences because it’s part of growing up. You’re just there, umaalalay ka lang.”
But when she was fine-tuning the lyrics for this project, Zsa Zsa admitted that she found herself identifying with the song, given the loss she experienced with Dolphy’s passing away. “Not because of a breakup but a heart breakup that I was experiencing with Dolphy. Feeling ko sinulat para sa akin. I guess it depends on your condition. If you’re not in a very happy relationship you can relate with the song. That’s why we made it the stages of love. It speaks of your heart’s journey. But it’s aspirational with our song ‘I Do,’ which will lead to happy ever after kind of life. It’s a song for wedding vows.”
She was also overcome with emotions after she recorded the song “Palagi” as she missed the presence of Dolphy. He was her inspiration when she recorded it, but it’s painful at the same time since he’s no longer there to share the moment. “I would ask him, ‘Can you hear this?’ And I would cry because I’d feel that void. Although I now understand people when they say they will always be part of your life, which I wrote there. When you really just concentrate hard enough, you feel it in your heart, the presence is there.” While she seems to be coping quite well with her positive aura nowadays, Zsa Zsa claimed that she still has her low moments but she’s determined to be strong and set a good example to her children.
Interestingly, the hardest song for her to record was “How Can You Say” because she found it difficult relating with the feeling of falling in love. “Because it’s about having a crush, trying to fall in love again. But then they wanted it to be there because it’s a process, [part of the theme of the album]. It has to appeal to different stages of love and to different people.”
As it is, Zsa Zsa maintained that she’s not yet ready to open her heart to a new love. “I’m still in mourning. For now, it’s a kadiri [thing for me]. May ganon na eh, because of my age also. Sabi nila pwede pa, pero I’m not in that stage of my life. I’m just happy concentrating on my work. If I didn’t have the soap, or if I’m not busy with the album, I’ll go crazy, ang hirap eh, it helped me heal.”
Under Polyeast Records, Zsa Zsa’s new album Palagi is now available in record bars.
Celebrity