Roel Manlangit talks about his plans after winning Pilipinas Got Talent season 4. 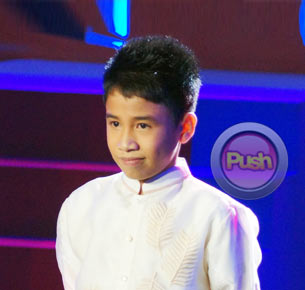 Roel Manlangit was hailed as Pilipinas Got Talent Season 4 grand winner last Sunday, June 2, 2013, at the PAGCOR Grand Theater. Roel admitted he plans to share his two-million peso prize money to his family for the betterment of their lives.
“Ipagpapatayo ko po ng bahay po ang two million at sa pag-aaral po naming magkakapatid po,” he relayed when asked what he will do with his winnings. Their house in Bukidnon province was destroyed due to Typhoon Pablo that hit the town in December. Of the six children in the family, only three are currently able to attend school. Now that is all to change because of Roel’s PGT victory.
Roel himself wants to go back to studying even with an impending singing career. “Magpapatuloy po ako sa pag-aaral. Mag gi-grade 5 po ako ngayong pasukan po,” he said.
The young singer was overjoyed when his name was announced as the winner. “Masayang-masaya po ako kasi naging grand winner po ako,” he said. He did not expect his name to be called though. When asked who he thought would win? “MP3 band po kasi po marami po silang votes nung semi finals,” he admitted.
His family and his co-contestants were also equally happy when his name was announced as the champion. Frankendal Fabroa and MP3 band who made it to the top three as well expressed their happiness over Roel’s success saying that the latter truly deserves it.
Roel performed “I will always Love you” with Zsa Zsa Padilla before the announcement of winners on Sunday. The young singer was ecstatic to share his experience singing with the Divine Diva. He also relayed that he was Zsa Zsa’s bet to win the title. “Manok daw ako niya. Pambato daw ako niya,” he said. He admitted that he was quite shy at first to do a duet with Zsa Zsa, but overcame it because his family was there to support him. “Nahihiya po ako [nong una] pero ano po okay lang po kasi nandito naman po ang pamilya ko po,” he said.
Now that he’s won, Roel wants to record an album. “Gusto ko pong mag-recording para maraming tao ang makarinig sa boses ko” he remarked. Roel admitted that he dreams to collaborate with Sarah Geronimo.
Celebrity