Julia Barretto admits that coming from a family of actresses makes her want to go beyond people's expectations. 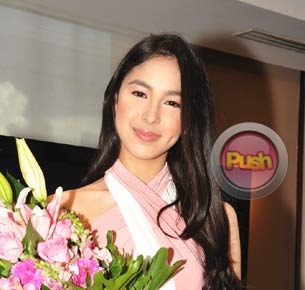 Julia Barretto was recently launched as the new Cofradia, an iconic role that was once portrayed by Gloria Romero. Now that she landed a major role in a Kapamilya teleserye, does she feel any pressure on her part? “May pressure kasi they’re going to expect me to do very well,” she remarked in an exclusive interview with Push.com.ph.
The budding star also admitted that she is quite worried that people might constantly compare her to the other Barrettos who made it in the industry long before she joined show business. “Aside from that, I came from a family that’s full of actresses, so every move ko papanoorin nila, so that’s the pressure for me,” she commented.
Julia admitted that she is setting the bar high for her self and is hoping to break new ground in order to meet people’s expectations. “I will have to do very, very, very well para hindi ko sila ma-disappoint,” she said.
Amidst the pressure, Julia is thankful to have been given the opportunity to showcase her talent. She thanked the management for the trust they gave her. “I feel very happy, thankful and I am very, very blessed kasi madami namang pwedeng mabigyan ng opportunity na maging Cofradia and nabigay sa akin,” she said.
On her preparations for the upcoming teleserye, Julia is set to do numerous workshops for the role. “We’re going to have workshops. We’re going to have a lot of acting workshops before we start taping,” she shared.
Julia was one of the many celebrities who graced Star Magic’s 21st parade of stars on ASAP. When asked about her journey so far as a part of the country’s leading talent management group, she relayed, “Very fun kasi I get to meet a lot of people almost everyday. Actually everyday I meet new friends. And the things that I’ve been wanting to do nagagawa ko na finally.”
Who does she look up to as an actress in Star Magic? “Bea Alonzo because she’s a very good actress tapos she takes on roles na iba sa mga ginawa niya sa past,” she commented.
Celebrity