Phil Younghusband recalls how he and girlfriend Angel Locsin marked their first year anniversary with simple yet romantic gestures. 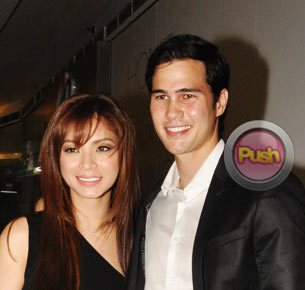 Phil Younghusband hardly left Angel Locsin’s side during the premiere night of Four Sisters And A Wedding. They’ve been so busy with their individual careers that it’s a rare sight to see them together nowadays. In an interview with the local press, the dashing Azkals striker shared that he actually had fun watching Angel’s feisty character in the movie. “My favorite scene was when Angel dragged (Mocha). I wasn’t really shocked though. I know Angel is very strong. I know she’s capable of doing that,” he cheerfully began.
The couple celebrated their first year anniversary of their romance last May and by the way they were so close to each other at the premiere, their relationship appears to be going strong. Phil related that he appreciates the fact that Angel made an effort to show up at his game in Singapore despite her busy schedule at the time. “I had a game in Singapore. She surprised me. It was very sweet of her. It was for our anniversary.” Like ordinary couples, they were content watching TV while in Singapore since they had no time to tour around.
But when they came home to Manila, Angel didn’t expect that Phil had also prepared a surprise for her. He told Push.com.ph that he actually made an anniversary video for Angel, which is a compilation of some of their moments together. “Yeah, pagdating namin sa Manila, I surprised her with a video that I made for her. All our memories, photos of the first time we met… It took me a month to make. So I’m glad she appreciates it,” said Phil who was all smiles as he recalled Angel’s reaction to his surprise.
Angel previously mentioned in an interview that she’s amazed with the way Phil’s thoughtfulness seemed so effortless and the fact that she can’t beat his romantic gestures. Asked if he’s a romantic by heart, Phil maintained that he enjoys making Angel feel special. “I enjoy it, I enjoy making the video, making her feel kilig. That's one thing that I want, I want to make her happy and kilig.”
Celebrity