Angel Locsin says she's not in the position to talk about Robin Padilla's extended absence from their sitcom 'Toda Max.' 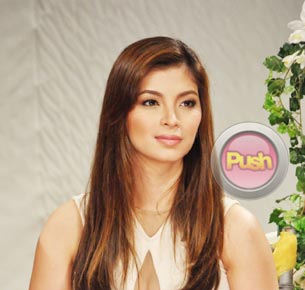 For the past few weeks, there have been speculations over Robin Padilla’s extended leave of absence in the weekly sitcom Toda Max. At first, many thought that it was because he got busy with his now-defunct teleserye Kailangan Ko’y Ikaw. He even asked permission from the big bosses to do so so he could focus on the drama.
But since the teleserye already concluded since last April, rumor has it that the renowned action star refused to go back to Toda Max after the management supposedly reprimanded him for appearing in a rival noontime show when he and wife Mariel Rodriguez had a marital rift a few months back. On the other hand, there were also talks that he was in the process of negotiating his talent fee since his contract has reportedly expired already.
Since Robin’s camp has yet to make a clear statement on the issue, his Toda Max co-star Angel Locsin was asked about his extended absence. The actress, however, merely stated that there’s no ill will between Robin and the cast of the show.  “Hindi, hindi... Actually, okay kami lahat. Na-miss na namin siya sa totoo lang pero kailangan naming respetuhin magiging desisyon ni idol.”
When asked about Robin’s continued absence, Angel said that she’s not in the position to discuss whatever his reason is. “Siguro ang makakasagot niyan production na talaga. Hindi ko masasagot kasi sila ang naguusap eh. Pero kami nami-miss na namin si idol talaga. Pero susuportahan namin kung ano man magiging desisyon niya.”
Celebrity