John Lapus says he will put tackle his various showbiz experiences in his concert 'Sweet in a Box.' 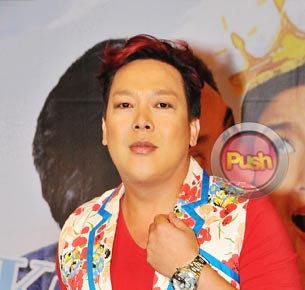 John “Sweet” Lapus will celebrate his 20th showbiz anniversary with an upcoming concert on June 15, titled Sweet in a Box at the Music Museum. “It is not all the time that a gay comedian like me actually stays in showbiz for 20 years. So I’m celebrating it with the help of my Star Magic family,” he said during an exclusive interview with Push.com.ph.
Sweet relayed that his concert will showcase the colorful experiences that defined his life in showbiz. “’Yung concert ko it will tackle ‘yung experience ko sa artista, ‘yung points of view ko about them,” he shared. He will also spoof some of the big names in the industry, which is his forte. “Of course meron din akong character na ispo-spoof. ‘Yung Kris Anino ‘yung famous character ko, of course she will be retiring na sa show business and she will announce kung ano ‘yung tatakbuhin niya for the 2016 election.”
He will also be introducing a new character in his concert. “I have a new character, si Tweetam. Siya ‘yung little girl na masama ang ugali na who wanted to be Little Miss Philippines. Eh masama ‘yung ugali niya kaya mayroon siyang ginagawa sa mga contestants para manalo siya,” he said.
“Sweet in a Box is basically Barbie doll. The poster is up na so you can see it. Laging sweet lagi ‘yung concept,” he revealed. The concert will be directed by Phillip Lazaro. “He is mostly the director of my concert. Matagal na kaming magkaibigan so kilala na namin ang isa’t isa,” he conveyed.
The comedian also revealed that seven designers will dress him up for the concert. “Aabangan din nila ‘yung seven designers na magdadamit sa akin. There are seven Filipino designers na I am so thankful na pumayag sila to dress me up for my anniversary show,” he exclaimed. The designers are JC Buendia, Pablo Cabahug, Jeffrey Rogador, Tatah Galias, Totoy Madriaga, Bea Albert, and Bing Cristobal.
Reflecting on his 20 years in show business, Sweet remarked that it has been quite a ride. “It’s more than a roller coaster ride. Pinagdaan ko ng 20 years is up, down, left, right, may ganoon pa ako,” he quipped. “May happy, may sad, but at the end of the day I’ve learned from it. I treasured the experiences that I gained on that 20 years na would of course manifest on my show on June 15,” he stated.
For ticket inquiries of Sweet in a Box, call 0927-7515726 or 0923-9299994 or TicketWorld hotline 891-9999.
Celebrity