Toni Gonzaga says that she and boyfriend Paul Soriano are still making new discoveries together. 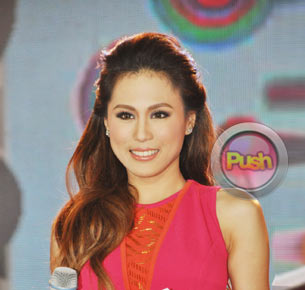 Since Toni Gonzaga and director Paul Soriano have been together for six years, they have been frequently asked as to whether or not they are getting married yet. “Siguro natatagalan kayo pero sa amin parang laging nagsisimula pa lang, kasi marami pa kaming hindi ginagawang bagay na ginagawa ng couple,” Toni told the press during the 4 Sisters and a Wedding grand presscon.
The actress and host added that the good thing about them as a couple is that they never run out of new things to do. “Deprived naman kasi kami sa madaming bagay kaya ang dami pa naming nilo-look forward,” she said.
Despite their busy schedules, Toni shared that they do spend time together often. She further relayed that they’re able to make discoveries every time they bond. “We really make time to see each other. We really find ways to make the relationship stronger. May mga bago kaming bonding, may mga bago kaming nadi-discover together,” she said.
The 4 Sisters and a Wedding star added that Paul even enrolled her in a cooking class, one of the many things that helped them grow us individuals and as a couple. “He is really the one who pushed me to cooking classes, so maraming siyang mga activities na naiisip na naggro-grow kami together,” she stated.
Toni further commented that though she has a dream wedding in mind, marriage is still something far from happening. “May dream wedding, may dream destination, pero hindi ko pa talaga alam kailan. Kasi parang ang henerasyon na ito ha, napansin ko lang, this generation hindi nagmamadaling magpakasal,” she said.
Toni is one among the few celebrities who takes pride in staying with her parents and following their rules even at her age. When asked if hypothetically she’s tying the knot already, would her parents be ready for it? “Sabi naman ng mga magulang ko na once na mag-decide ka na magpapakasala ka na, hindi ka na namin sakop, magpapasakop ka na sa asawa mo, tapos na ‘yung pagiging strict namin sa ’yo. Pero hangga’t nasa bahay ka namin kailangan sumunod pa talaga,” she remarked.
Celebrity