Denise Laurel is excited to further improve her craft through the help of her co-stars Patrick Garcia, Carlo Aquino, Kaye Abad, and Zanjoe Marudo. 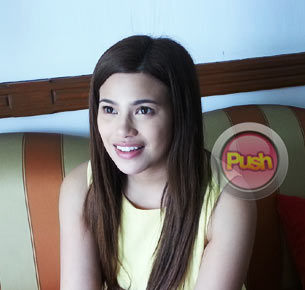 Push.com.ph got the chance to visit Denise Laurel on the set of ABS-CBN’s upcoming teleserye Annaliza where she plays Isabel, a pastry chef and the best friend of Lazaro to be played by Patrick Garcia. Asked how she feels to be given another project soon after her stint in Paraiso, the talented actress shared that it’s an honor to be part of the remake of a popular soap back in the ‘80s. “I’m always grateful to ABS-CBN for giving me amazing projects to work on. Nakakakaba.  You want to give honor to the old production ng Annaliza, siyempre if you can give it your own flavor or higitan pa yung nagawa nila then sana magawa ko,” she happily began.
As an actress, Denise said that she’s the type who gets motivation from the profile of her character and doesn’t rely too much on her personal experience to bring it to life. “It depends. Every character has a different back story. I listen a lot to my director and I read the script over and over again. Pero nag-research din ako. I googled about pastry chefs and I read about stuff that has to do with my character. Dito, it’s the first time that I’ll be playing a more mature role. I will put a little bit of my personal life din. Pero most of the time I don’t use my personal life experiences.”
The 26-year-old is also thrilled to be working with such a great cast, which includes Patrick Garcia, Zanjoe Marudo, Carlo Aquino, and Kaye Abad. “I’ve worked with Carlo before, I’ve known Patrick for a while and I’ve worked with Zanjoe also. Ang cool ng cast. Si Ate Kaye, we were in (Precious Hearts Romances Presents) Bud Brothers together, si Z magkasama kami sa Kristine Series, si Carlo sa Rakista kami ang magka-partner, si Patrick we have the same agency. Sobrang cool. And now I get to work with Andrea (Brillante). She's so sweet. You can see why they chose her (for the title role).”
Denise believed that she will be learning a lot from her co-stars especially because most of them have been in the industry longer than her. “It’s actually nice getting to know Patrick as an actor because we just know each other from our management. Pero I see why [he’s such a good actor] mata pa lang [umaarte na, nakikita agad yung emosyon], alam mo na. Si Z, sobrang kalog, sobrang saya kasama, sobrang husay, walang ere, walang yabang. Same with Carlo, I love sharing a scene with Carlo kasi giving [siya]. Si Ate Kaye, I can’t wait to shoot a scene with her. We all know naman that she’s a great actress. It’s a working set. We all love our job. Lahat kami nagtutulungan.”
Celebrity