Kim Chiu and Maja Salvador are still not ready for reconciliation

Contrary to their characters in 'Ina Kapatid Anak,' Kim Chiu and Maja Salvador have yet to resolve their personal issues with each other. 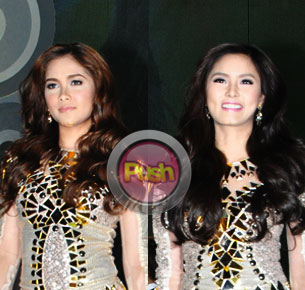 While there’s no doubt that Kim Chiu and Maja Salvador remain professional every time they work together, the two are still obviously aloof towards each other. During the recently-concluded Kapamilya trade launch, Kim and Maja performed Rihanna’s “Diamonds” for the opening number but never made eye contact with one another while they were on stage.
After their performance, Push.com.ph and other ABS-CBN reporters got the chance to interview Kim who happily talked about her recent reconciliation with her father. But when asked if she’s also willing to patch things up with Maja, the young actress respectfully begged off from further discussing the longstanding issue. “Tsaka na ‘yan. Diamonds in the sky na lang,” she merely quipped before ending the interview backstage.
In a separate interview, Maja dodged the media’s queries and immediately went to her luxury vehicle together with her friend Cacai Bautista. But before leaving the premises, she agreed to give a message to all the avid viewers of Ina Kapatid Anak. “Maraming salamat sa sumuporta sa akin. Abangan niyo ang pagbabati nila Margaux [at Celyn sa show].” When prodded about a real-life reconciliation between her and Kim, she vaguely replied, “Thank you. I love you!”
Meanwhile, Maja and Gerald Anderson are becoming more open about their growing romance as the latter personally greeted the actress for her tenth year anniversary in showbiz during her celebration on ASAP last Sunday, May 5. Gerald even brought a bouquet of long-stemmed flowers for her, much to the delight of their fellow hosts in the show. The fact that Maja was dating Gerald was the reason for her tiff with Kim.
Interestingly, Kim and Maja’s characters in the primetime teleserye Ina Kapatid Anak are set to reconcile in the next few weeks. The teaser was actually released last Wednesday where Margaux (played by Maja) was shown asking for Celyn’s (Kim) forgiveness: “Hindi ko alam kung paano ako hihingi ng tawad for hurting you. I'm sorry, Celyn. I am so sorry.”
Celebrity