Daniel Padilla wows the crowd during his first birthday concert

Thousands of fans trooped to the Araneta Coliseum to show their support for Daniel Padilla's concert. 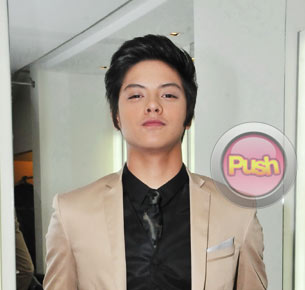 Last Tuesday night, April 30, fans and supporters of Daniel Padilla proved their love for their idol as they showed up in full force at the Araneta Coliseum in Cubao, Quezon City to attend Daniel Live, DJ's first major birthday concert. As early as 4 pm, fans were already lining up outside the venue to get the best possible seats. DJ and his celebrity guests were already inside rehearsing for the program even before lunchtime.
The show started at 8 pm with Daniel getting the audience to their feet with his opening number “We Will Rock You.” The rock n’ roll themed-concert had a stage that was decorated with '50s beat-up cars and a gas station-like vibe. DJ followed up with an Eraserheads song “Ligaya” which had the fans screaming their lungs out singing with him.
Seen in the audience were DJ's family which included his parents Rommel Padilla and Karla Estrada, ABS-CBN President Charo Santos-Concio, Star Magic's Johnny Manahan, and DJ's celebrity friends Julia Montes and Miles Ocampo who both arrived dateless and watched him perform from the front row. DJ's impressive list of surprise performers included Arnel Pineda, Yeng Constantino, Pokwang, and Vice Ganda (who is also set to stage a concert at the Araneta Coliseum on May 7). DJ was also joined by his Princess and I co-star Khalil Ramos as well as Star Magic talents Kiray, Jon Lucas, Liza Soberano, Michelle Vito, and Ingrid Dela Paz in a Beatles medley which got the audience dancing.
Another standout performance was DJ's “Mr. Suave” number with his siblings JC, Ralph, and RJ. The teen heartthrob introduced his brothers as his real “partners in crime.” He then got his bass guitar and performed two songs with his band Parking 5 while his brother JC took on the vocals. The 18-year-old singer-actor could not contain his happiness after seeing the crowd's enthusiasm and admitted, “Ito na talaga ang best birthday ko.” DJ also shared with his fans some advice on how to reach for their drams and to never stop working hard to reach their goals. He told them that that the concert was his way of giving back to them for a change. “Kung ano man yung pagmamahal na binibigay niyo sa akin, gusto kong suklian yun,” he said.
During the second half of the show, DJ came on stage wearing a silver formal suit and told the audience he would like to dedicate his next song “Ako'y Sa ‘yo at Ika'y Akin” to Kathryn Bernardo which made the crowd grow crazy once again. After the song, Vice Ganda surprised him on stage and gave “advice” on how to make their number more “kilig-worthy.” The Showtime host also managed to get DJ to show off different popular dance moves like “Teach Me How to Dougie” and the “Harlem Shake.” When the audience requested for DJ to do the current craze Gwiyomi, Vice told them, “Naku hindi naman pa-cute yung pamangkin, rocker ito kaya hindi bagay sa kanya yun!”
When Kath gave her birthday wish for DJ, she couldn't help but get teary-eyed because she was so happy for the successful turnout of the show. “Congratulations kasi di ba dream come true mo na ito? Super proud kami sa yo. At saka sana talaga mag-tuloy-tuloy ang blessings at saka huwag kayong magsawang suportahan si DJ kasi sobrang bait niyang tao talaga. I'm happy talaga para sa kanya,” she admitted.
The two sang DJ's popular song “Nasa ‘yo Na Ang Lahat” while holding hands and hugging all throughout the song. The concert ended around 10:30 pm. Although DJ admitted he was exhausted, he said it was worth all the effort and the chances of a repeat concert happening again next year was a definite possibility.
For more updates on Daniel Padilla, log on daily to Push.com.ph and follow Push_Mina on Twitter.
Celebrity