Lovi Poe denies being in a relationship with Jake Cuenca

The actress admits though to dating the Kapamilya actor. 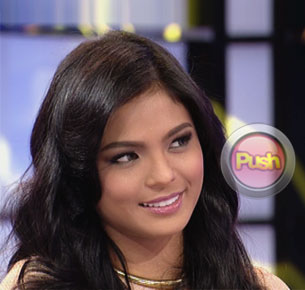 While Jake Cuenca has admitted his love for Lovi Poe on national TV last November, the actress has remained more restrained on the matter, having nothing to say but good words for the actor. In an interview with Charlene Gonzales on The Buzz, the actress commented, “Sobrang mabait si Jake and very sweet.”
She denied, though that they were already together. “Honestly, we see each other a lot. It’s not a relationship. But then, he’s of course special naman sa akin.”
When asked what it would take for her to bring the relationship to the next level, she commented, “Honestly, I don’t know. So many things happened to me for the past few years. I want to take my time first kasi di rin talaga biro ‘yung nangyari sa akin. And right now wala. We’re both very busy and we’re both supporting each other in a very positive way.”
During The Buzz interview, Lovi also discussed for the first time what went wrong with her past relationship with Ronald Singson. “My relationship kasi with Ronald was really good and he was a wonderful guy. Of course aside from the distance and time, there were a lot of people around us that I couldn’t deal [with] anymore so I had to let go,” she remarked.
Lovi denied reports that a third-party was involved in the breakup. She also clarified that Jake had nothing to do with the breakup as opposed to the rumors. “It’s not true about Jake.”
Now, the actress is just focusing on her career. Her movie with Paulo Avelino and Jennylyn Mercado titled The Bride and the Lover will be showing in theaters soon.
Celebrity