Sarah Geronimo's love advice to Angeline Quinto: 'Learn to detach from your co-star'

Sarah Geronimo says she and Angeline Quinto talk about how to deal with developing romantic feelings for a co-star. 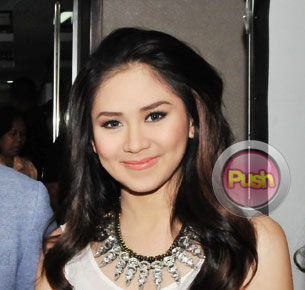 Sarah Geronimo admitted that she and fellow Kapamilya singer Angeline Quinto had the chance to have a heart-to-heart talk about dealing with love problems. Like the Popstar Princess, the Star Power champ also experienced having an avid suitor whom she almost fell in love with. But Angeline held back her feelings since entering a romantic relationship might just sidetrack her from pursuing a career in showbiz. “Nagkaroon na ako ng learnings na napagdaanan na natin bilang nauna tayo sa kanila. Ang maganda diyan  nagiging generous tayo sa suporta at pagbibigay ng advice,” said the Popstar Princess who refused to say what her exact advice was to Angeline.
Apparently, it had something to do with being carried away by a co-star’s way of making her feel special on- and off-cam. Sarah further shared that guarding one’s heart against kilig moments is really a tough challenge. “Pero mahirap pa rin yan i-apply sa sarili mo especially with the kind of business that we are in. We get to work with different people, get to spend a lot of time with them. Kung minsan wala kang choice na sila talaga ang palagi mong nakakasama. You get to do intimate scenes with them, kinikilig ka… Importante as an actor na naibibigay mo yung sincerity ng inaarte mo. So hindi imposible na for a time mahuhulog ka dun sa ka-partner mo. So ang important lang nakaka-detach ka sa character mo to save yourself.”
Although they’re busy with their respective work commitments most of the time, Sarah said that she remains good friends with Angeline. “Yes, matagal na kaming magkaibigan. Hindi naman kami naging close before but we were both finalists sa Star for A Night. We were schoolmates nung elementary. Masaya ako na magkasama kami ngayon sa business na nandun ako. Sa ngayon I lost contact with her. Kailangan namin mag-catch up.”
On her part, Sarah claimed that she’s not closing her doors on having a love life, but the fact is that she hasn’t found the right guy yet. “Wala naman po akong tinatanggihan na thought of being in love. Yung pagiging in love napakasarap na experience. It’s just that it’s not happening right now. Sana, I’m hoping na when it happens, it’s for real.”
But is she ready to fall in love now? “Hindi ko masasabi kasi meron akong The Voice at concert tours na gagawin. Tignan natin.”
Celebrity