Anne Curtis says she won't risk her flourishing showbiz career for a chance to make it in Hollywood for now. 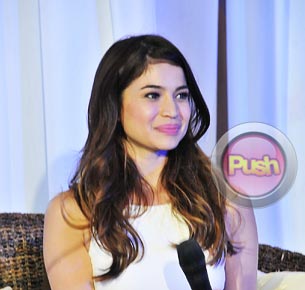 Anne Curtis was really flattered to be considered as one of the cast members of the new American TV series Hannibal (currently being shown on NBC) by no less than its creator/producer Bryan Fuller. During the press con of Wrigleys and Cinema One held yesterday, April 18, the actress related how the whole thing came about.
“It was a pleasant surprise. PR Asia (a public relations company) was the one who tweeted and suggested. Nung sumagot si Mr. Billy, ‘Oh I’d really love to. Anne is amazing.’ Halos mahimatay talaga ako dun sa event [the moment I heard the news]. But I have to audition before anything yet. If given the time I would go there and audition for it. But I think we all know that when it comes to cameos like that you have to take time to audition and travel there,” said Anne when asked by Push.com.ph during a joint press con for Wrigleys Double Mint and Cinema One held at the ABS-CBN compound last April 18.
But while it is every actor’s dream to make it to Hollywood, Anne maintained that she’s not yet ready to risk her flourishing career in the Philippines even for that rare opportunity. “Unfortunately, yung commitment ko sa Showtime, hindi pa pwede. Hindi pa siguro right timing. That’s a giant leap, to leave what I have here to audition there. Hindi pa ako handa. Masyado ko pa ine-enjoy yung Showtime. It took me on my 16th year in showbiz to get where I am, so ‘di ko hahayaan na i-risk na mawala pa kung nasaan ako ngayon. Eventually, yes, pangarap ko yun. Pero masyado ko mahal ang Showtime.”
True enough, she has more reasons to stay given her successful career, be it in acting, hosting or singing for that matter. After conquering the Big Dome, she has yet to fulfill her dream to stage a concert at MOA Arena. “Oo naman priority ko pa rin ang local showbiz. Dito ako nag-start and I hope this is also where I want to end my career.”
Nevertheless, Anne is grateful that a Hollywood producer such as Fuller appreciates her talent. “Yes, I think it’s really flattering to hear such kind words. Nakakatuwa, nakakakilig,” she happily exclaimed.
Celebrity