Dawn Zulueta talks about the challenges of being a celebrity mom and what she wants her children to become in the future. 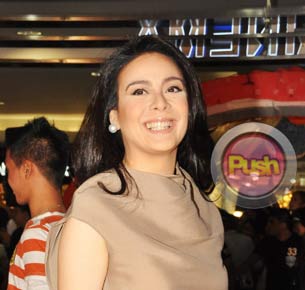 Many viewers said Dawn Zulueta was a scene-stealer with her effortless beauty and fashionable gowns when she hosted the recently-concluded 2013 Binibining Pilipinas Gold coronation night at the Big Dome. When asked how she feels that she seemed to have outshined the 50 lovely contenders based on the positive feedback about her via social networking sites, she humbly said that she didn’t mean to upstage anyone. “Naku naman, ang ganda naman na compliment yun. Ang sarap pakinggan pero it wasn’t my intention. As a matter of fact, I felt very honored that they chose me to host because it’s the 50th year so napakaespesyal ng Binibini this year. Then I just realized nung Sunday na next year pala tayo ang host na country for the Miss Universe. O, ‘di ba? that’s really exciting.”
At 44, Dawn remains one of the most beautiful faces in the country. She is a living testament that raising a family shouldn’t hinder a woman from taking good care of oneself. But more than any beauty regimen, the talented actress said that having a positive outlook in life keeps her looking young and radiant. “Ay naku, wala ako nun (abs), mukha lang meron. Haha! I’m so tamad. I don’t even go to the gym. I know I should. Why? Because it’s healthy and I encourage that with everyone. It’s important that you have cardiovascular exercise. I’m not very good at it, but I will try my best.”
In the same press con where she was launched as the celebrity endorser of Progress Pre-school Gold, Dawn shared that it’s quite a challenge for not just a celebrity mom like her, but any other mom who has a career, to figure out ways to ensure that their children get the best kind of education and are never left behind in school. But aside from academic excellence, she is a firm believer of developing a child’s multiple intelligence (eight types based on the enlightening talk given by Dr. Thomas Armstrong including self-smart, people-smart, picture-smart, logic-smart, music-smart, body-smart, word-smart, and nature-smart) by exposing them to various activities even outside school. “Para ma-develop ang bata ang multiple intelligence kailangan mas ma-expose sila sa kung anu-anong bagay—anything that interests them. By playing outdoors they discover a lot of things about nature, ‘pag may kalaro sila nade-develop din yung iba nilang multiple intelligence like people smarts nila, how they relate with other people. ‘Pag nagaway sila how do they mend it. School is there to teach the most practical things like alphabets, numbers, but how you bring that altogether and make the most out of it in the practical world [is also important].”
At a time when modern technology is made easily available even to young children, Dawn said that it’s important to limit their exposure to gadgets as it hinders them from exploring their surroundings. “I can relate to it kasi I am a child of that kind of era, remember I was raised in the ‘70s. Wala pang computer nung time na yun. Talagang na-enhance ko lahat ng multiple intelligence ko because I played outdoors. I really was able to explore. Na-expose ako mabuti.”
Dawn added that she sets certain house rules for this to be possible. “Kasi siyempre as a child is still growing you need to impart to them a certain kind of structure. Yun ang sinasabi natin na dini-discipline natin sila like only one hour of TV. When you get home, the first thing you have to do after your snack is do first your assignment before playing. It’s just a structure because you want to teach them that later on, these are habits that they will be able to bring with them when they grow up.”
Will she allow her children to join showbiz when the time comes? “Parang nakikita ko yung aking daughter, si Ayisha [may interest sa showbiz]. Siguro dahil lagi niya akong napapanood na nagme-makeup, nagaayos ng buhok, kasi I work, ‘di ba? Parang nai-imbibe niya yata. We’ll see. I don’t encourage it yet dahil ang gusto ko gawin ng mga anak namin ngayon magaral muna sila. Later on kapag naka-graduate na sila they can decide on their own.”
As for her son Jacobo, Dawn said she hopes that he would follow the footsteps of his dad and venture into politics. “Who knows I just might have the next president of the Philippines? Gusto ko muna siya mag-explore doon. Like Jacobo is very people smart unlike me when I was growing up, I was shy and my daughter takes up after me. But Jacobo takes up after his father. Or baka gusto niya maging lawyer someday. Who knows? I’m not putting down yung mga gaya ko na celebrity, pero let’s see first if they have other talents.”
Celebrity