From race track star to Kapamilya dramatic actor, Matteo Guidicelli recalls his childhood, how his parents helped him hone his talents and how parents could do the same for their children through Prom 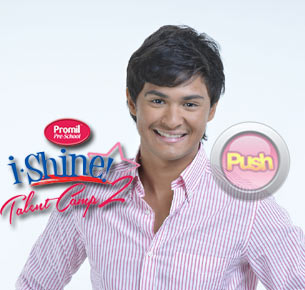 He was first known from his racing career, having started at an early age of 11. This Filipino-Italian hunk got his first taste of fame when he won numerous awards including being a three-time winner of the Karter of the Year award. In 2010, Matteo Guidicelli got his first big break in the now defunct ABS-CBN primetime fantasy television series Agua Bendita.
With a hit teleserye that just wrapped up, regular guestings at ASAP 18 and consistent workouts plus trainings, Matteo Guidicelli surely enjoys the perks of being a sought-after actor, a famous model and a competitive athlete but even with his hectic schedule he still finds time to bond with his family especially with his 5-year old brother, Gian Paolo.
“My brother is also into sports like me. And he likes to dance so I get him a lot of Justin Bieber” [Justin Bieber songs, Justin Bieber videos]. I bond with him by bringing him to my triathlon trainings plus I go with him in his swimming lessons. I motivate my brother because back then when I was young my parents used to do the same,” Matteo shared.
“Even though I liked risky sports like horseback riding, motocross, and go-kart, my parents always supported me in my competitions and training, and that gave me the motivation and confidence. Motocross used to worry my mom but she was still supportive,” Matteo said. "I got my flair for racing from my father’s side; they’re all into motocross," he added. “If it weren’t for them I wouldn’t be who I am today, I wouldn’t be as confident with what I can do and with all the things I want to try out.”
Just like Matteo’s parents, support your child and hone his talents by joining Promil Pre-school I-Shine Talent Camp 2 (for children above 3 to 7 years old). Your child can showcase his talents and gain confidence by interacting with other talented kids. Simply purchase a minimum of PHP250 worth of Promil Pre-school pack size (180g, 900g, 1.6Kg pack) from April 1 to May 19, 2013.
To join, parent/s or guardian, together with his/her child, must go to the I-Shine event on the following dates and venues: SM City San Pablo, Laguna – April 20, 2013, SM Rosales, Pangasinan – April 27, 2013, SM MOA, Pasay - May 1, 2013, Abreeza,  Davao City - May 4, 2013 and Ayala Center, Cebu City - May 12, 2013. Aside from auditions, the mall events will also hold FREE Star Magic Workshops in voice, dancing and acting and other fun activities.
You can also record a three-minute video (MPEG, MP4, WMV, AVI or MOV video file format) of your child showcasing a talent in singing, acting or dancing and send or mail the video with a valid proof of purchase to either of the following addresses: ABS-CBN Sgt. Esguerra Ave, cor. Mother Ignacia St, Quezon City, 1103, Wyeth Nutrition P.O. box no. 1207.
Submission of entries is from April 1 to May 19, 2013. Over PHP 1 million pesos worth of prizes, plus talent contracts from Star Magic and Promil Pre-School will be given away!
Let your child’s talent shine at Promil Pre-School i-Shine Talent Camp 2!
Celebrity