Lea Salonga, Bamboo Manalac, Sarah Geronimo, and Apl.de.Ap get to know each other

Broadway superstar Lea Salonga says her fellow The Voice coaches' success stories and likeable personalities make her proud to be working with them. 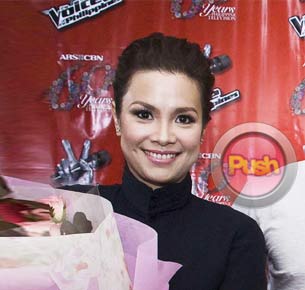 Although the coaches of The Voice of The Philippines are required to do whatever it takes to make their respective teams win, Broadway superstar Lea Salonga stressed that there wouldn’t be any rivalry between her, Bamboo Manalac, Apl.de.Ap, and Sarah Geronimo and that they wouldn’t intentionally outshine each other in the show. “The thing is The Voice of The Philippines has picked four illustrious individuals, all of whom have achieved something in this industry. However, the focus cannot be on us. It has to be on the person who's singing, who’s working towards that ultimate goal. And that is our job—
to help push them and encourage them to get where they want to go,” said Lea during the recent press con of the said reality singing competition.
When asked about their first impressions of each other, world-renowned hip-hop artist Apl.de.Ap proved to be a real down-to-earth kind of guy as he initially felt nervous around his fellow coaches. “At first I was kind of a bit intimidated. But after we hung out, I discovered that they’re very nice people. We got to share stories. We’ll be hanging out a lot so it’s going to be cool.”
Lea further shared that she was even more thrilled to work with the others who not only share the same passion for their craft, but also turned out to people she’d come to like and respect. “I knew of everybody. I have worked with Sarah previously, I met Apl a couple of times, I met Bamboo in his guestings at ASAP, and I think I bumped into him at the mall coming out of a bookstore. But these are people you know of, you hear about, get excited about. When you actually see them up close and in person, it makes you even more excited to know that, ‘Ay, ang bait bait pala!’ That makes me feel that, yes, these are great people and they absolutely deserve the success they have been.”
Rock star Bamboo added that he’s excited to get to know each one of them better as the show progresses. “I look forward to hanging out more with them for the next few weeks or months. My first impression of them, it’s awesome, it’s a pleasure. But I think what’s going to be important is to build this chemistry or bond that we have on the show so that it feels natural. Kaya nangyari yung dinner. It’s something we have to do, no distractions. Eyes on the prize, that’s what they say.”
On her part, Popstar Princess Sarah still feels overwhelmed to work with highly-respected artists both in the local and international scenes. “I was intimidated also like Apl. I was surprised na ang isang international artist na katulad ni Apl ay napaka down-to-earth, napaka reachable, napaka friendly. Hindi ko akalain. Sobra akong intimidated nung una pa lang nalaman ko kung sino ibang coaches. Sa tingin ko up to the very last day intimidated pa rin ako, but we are here with one purpose—yung mahanap yung The Voice of the Philippines and I think that will keep us united kahit na meron man kaming respective teams.”
Celebrity