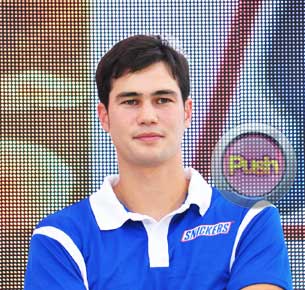 After winning their games against Cambodia and Turkmenistan in the recent Challenge Cup last week, Azkals striker Phil Younghusband admitted he is still on a high from their back-to-back victories. Phil played a key role in both games and scored the winning goal against Turkmenistan who beat them last year. “Mentally I'm still feeling excitement, the adrenaline from the game. It was a good result. It was history for Philippine football again and everyone's happy. Right now I'm feeling excited for the next game and feeling quite confident at the moment,” he revealed.
The Fil-British athlete admitted that there is a pressure on him in every game to put some points in the scoreboard. “As a striker, you’re judged on how many goals you score. If you don't play well but you score, as a striker that's still good. And people always look at you, whether it's your teammates or your coaches or your fans, they always look for how many goals you score. For me obviously, I want to work hard for the team but I know the people won't be happy with me unless I score so I do always have a goal that I want to score. Obviously I want to score in all of the games but sometimes its not always possible,” he explained.
Phil said there is still a lot in store for the Philippine national football team this year. “The Challenge cup is the main tournament, it's the start of… if we win that cup then we're in the Asian cup which is a big deal because we'll be playing against teams like Japan which are always in the World Cup. We also have exhibition games. So for me, in terms of the national team, it's about playing games and scoring goals and improving myself as a football player. The good thing about international games is you get to expose yourself to other countries and get more experience and improve your level of player, things like that,” he added.
With the growing popularity of football in the country, Phil said there has been a lot of changes in the Azkals as well. “Obviously there's players based abroad with Filipino blood, for all of us we're all Filipino at the end of the day. The blood that runs through us is just as strong as any other Filipino. The team is having players come in from overseas with more experience playing at a really high level in other countries and bringing them into the team obviously makes it seem a lot stronger to compete with teams at a high level with high rankings. In terms of individual players, we have a lot stronger squad and the players on the bench—everyone on the bench can start the game and everyone has a chance [to play]. And the competition is high but it's always difficult in trying to gel with the team. Even when you put good players together, you still need some time to gel. Maybe sometimes it's not enough time because the players based abroad they have their professional football there where they're playing so obviously thy can only come away for a week or even less so it's not always easy to gel. But with the players' abilities, even without gelling we can still do something so it's a lot different team from the one from a few years ago but for me it's improving football and the team's having more success,” he said.
With a busy training schedule, the 25-year-old Azkal said that even during Holy Week, he was busy training. Which is why he has been hoping to find some time to relax with girlfriend Angel Locsin. “Obviously I haven't had much of a break so I want to have a little break and spend time with family and loved ones and friends. During Holy Week I was still training so I didn't really get a break so maybe I'm going to try and find another time in the year for a trip with Angel. That's why I'm trying to find time in the schedule to get away. It's always conflict in schedules whether it's got to do with the national team or Meralco Sparks, the team we play for in the UFL, or whether it be with other commitments, it's quite a busy life at the moment (laughs). So I think I need a couple of weeks where I'm just dong nothing (laughs),” he said.
Phil said has been thinking about bringing Angel to one of her favorite destinations. “Ideally I find traveling tiring. For me, I'd like just a short trip, nothing too long and where I'm under no pressure to wake up, where I can sleep in and then in my own time, I can wake up and just explore. Me and Angel are planning to go to South Korea, so somewhere within Asia. Angel filmed a movie there before so she likes it there and she likes the autumn. She likes to see the brown leaves falling off the trees and things like the that, something that she doesn't really get to see in the Philippines so it would be good when we can go there. For me an ideal vacation is pretty much is no stress, I don't have to think about any work, just doing everything in my own time,” he shared.
For more Kapamilya updates, log on daily to Push.com.ph and follow Push_Mina on Twitter.
Celebrity