The Popstar Princess is ready to share her day-to-day life again via the microblogging site. 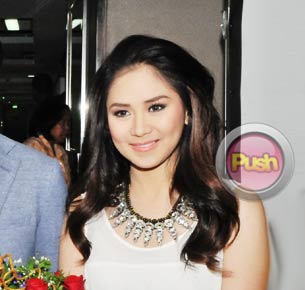 After two and a half year-break from the social media bandwagon, Sarah Geronimo opens new Twitter account (@JustSarahG) to regularly keep in touch with her avid followers once again. In her first post yesterday, March 20, the Popstar Princess tweeted, “Hi everyone! This is sarah g. And I'm back on twitter. :)” Aside from inviting everyone to watch out for her upcoming movie, It Takes A Man and A Woman, the Favorite Artist awardee also thanked her supporters for their votes during the recently-concluded Myx Music Awards.
You will recall that Sarah stopped tweeting via her previous Twitter account (@SGeronimo25) because she easily got affected by the negative feedback from some online haters. “Hindi na ako nagti-Twitter, medyo matagal na. Nadi-depress kasi ako. Noong umpisa kasi kapag may nababasa akong below the belt na tweet… Natatakot kasi ako na may mabasang hindi maganda. Hindi talaga para sa akin ang Twitter eh,” Sarah explained in an interview with ABS-CBNNews.com back in 2011.
Many things happened in the singer-actress’ personal life and showbiz career, hence, this decision to be active on social media again further shows her desire to be “fiercer, bolder, and braver” this year. Sarah has gained almost 17,000 followers in less than 24 hours.
Celebrity