After graduating, Khalil Ramos says he will focus more on acting this year 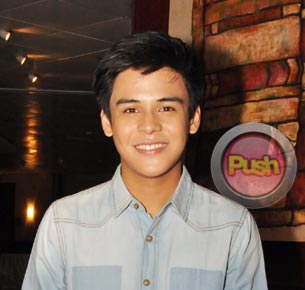 As part of Star Magic Circle 2013, Khalil Ramos said he looks forward to honing his skills like acting, singing, and dancing. “Being part of the circle is really amazing pero what the people can expect from me, masasabi ko na ang Star Magic ang galing talaga nila mag-alaga. Ngayon I'm doing workshops for everything. And sa singing, hindi na ngayon kasi nag-aral na ako ng singing before so now sa acting and dancing. Pagdating sa new things, you'll see more of me dancing in ASAP—that's one. And acting, hopefully in future projects, I'll be acting more. I would also like to explore if ever, I want to do comedy, action. And as an actor—masasabi ko rin naman na I'm an actor na rin—so as an actor I want to explore the world of acting naman,” he said.
After doing Princess and I, Khalil said he wants to get more chances to work with other talented Kapamilya talents. “Sa mga veteran artists, I would want to work with sina John Lloyd Cruz and of course, yung mga magagaling. Lahat naman sila mahuhusay pero I laud them for yung pagkahusay nila sa craft,” he shared during the Star Magic Circle batch 19 launch held last March 7 inside the ABS-CBN compound.
When he graduates from high school this month at the Colegio San Agustin in Makati City, Khalil said he plans to defer his freshmen year in college to 2014. “I talked to my mom, my handler, and Mr. M (Johnny Manahan) about it and I'm going to take a year off of school muna. I'm going to work because I want to see kung what's in store for me here. So mag-fu-full-time ako and hopefully maging succesful itong year na ito,” he shared.
The 17-year-old singer-actor said he will miss his schoolmates who have always been understanding of his job outside school. “Masasabi ko hindi naman ganun yung iniisip nila. Siyempre mas malaki yung market namin sa masa, pero sa kanila it's not like parang baduy, hindi naman ganun I think they like the fact that I appear on TV. It's like quite cool for them. Parang, they say they saw me on TV, ganun, astig. I never heard anything bad from anyone,” he said.
Khalil also shared why he is not expecting any big graduation presents. “Ngayon none yet because bumili kami ng house after nung PGT (Pilipinas Got Talent) pero sana car pero wala naman ako talagang hinihingi. Well I like shoes so I think my mom and dad are going to get me shoes (laughs),” he added.
During the Star Magic Circle launch, Khalil admitted to the media that his celebrity crush was his co-batch member Julia Barretto. “To admit that I had a crush on her, that was the first time yes. Hindi ko pa nga siya nakakusap about it (laughs). Nung narinig ko yung question I was the last pa to answer so naisip ko I'll just say it kasi sasabihin ko rin naman soon so why not now. First time ko naging vocal sa babae. I admire her for who she is and what she is to me. So I like her for that,” he said.
Khalil said that after meeting Julia in last year's Star Magic Ball, he had no idea they would be in the same Star Magic Circle batch. “When I found out at first I was surprised and I went up to her to say, 'Uy were part of the batch pala.’ It was fun, it was a happy moment and we’re good friends. We're close friends and it's really nice,” he added.
Khalil said he is not bothered about fellow Star Magic Circle batchmate Julian Estrada's admission that he would choose Julia to be his leading lady in a project. Julian also posted photos of himself and Julia on Instagram. “Hindi naman. Wala pa naman sa level na pagseselosan ko. I just like her. Wala talagang competition,” he added.
After admitting to Push.com.ph last year that he was considering courting Julia last year, Khalil said this year will prove to be very interesting when it comes to his love life. “Is it fate? Well I don't know. It’s nice to know that I'll be seeing her more often now,” he said with a smile.
For more updates on Khalil Ramos, log on daily to Push.com.ph and follow @Push_Mina on Twitter.
Celebrity