Billy Crawford admits that while he and his girlfriend Nikki Gil hope to end up together, they want to do things right. 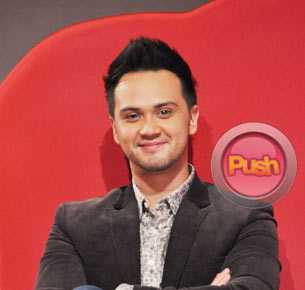 Billy Crawford denied that he got jealous of Patrick Garcia who starred with Billy’s long-time girlfriend, Nikki Gil, in the pilot week of the teleserye Apoy Sa Dagat. Patrick and Nikki portrayed star-crossed lovers who had twin daughters played by Angelica Panganiban.
Since Patrick and Nikki were required to act as a couple who are very passionate and very much in love with each other, Billy allegedly got jealous and had a rift with Nikki that lasted for a week.
Billy, however, denied this in a recent interview. “Unang-una, siya (Nikki) ang unang-unang lumapit sa akin at nagtanong kung okay lang… bilang respeto rin naman niya sa akin ‘yon,” related the It’s Showtime and Pilipinas Got Talent host. “Pero trabaho niya ‘yon, wala naman akong magagawa.” Billy added that he was not able to watch those episodes with Nikki and Patrick, but knew that the two garnered a lot of positive feedback for their convincing portrayals.
Nevertheless, the international pop star is very proud of Nikki, who got rave reviews for her short but notable performance. “Nabitin ako for her performance,” said Billy. “I hope na bigyan siya ng break because she really deserves it. Alam ko ‘yung pinagtrabahuhan niya no’n. ‘Yung umuuwi siya ng alas-onse ng umaga from being there from six o’clock in the morning (the day before). Sobrang drained siya pero ‘yung performance kitang-kita mo naman kung paano niya inatake and I think she deserves more from her performance.”
Speaking of acting, Billy was also asked if he has any plans to do more acting. His last movie was Moron 5 And The Crying Lady in 2012, while his last TV acting appearance was in Toda Max. The singer-host related that aside from having his hands full with hosting stints with shows like PGT, ASAP and It’s Showtime, he wants to concentrate on his music career. “Unahin ko muna ‘yung performing ko,” he said. “I’ve been hosting; may ASAP naman ako, PGT, [It’s] Showtime; it’s good to get back into singing and dancing,” he shared.
He further explained, “Ayoko kasi ng mag-jump ng trabaho. Gusto kong mag-concentrate… kung hosting, magko-concentrate [dapat sa] hosting. Kung gusto kong mag-perform and singing ito ang [papasukin] ko. Ayoko ng sabay-sabay kasi dun ka maloloka, dun magugulo ang mga desisyon mo [at] performance mo kasi di ka focused sa isa.”
Billy revealed that he is slated to fly to Paris, France this coming September or October to focus on his international album. He is not sure yet as to how long he will have to stay there.
On a personal note, Billy’s relationship with Nikki is going on its fifth year. In a separate interview, Nikki shared that she might be ready to settle down after three years. Billy didn’t mention any timeline about wedding plans, but he pointed out, “We’re trying to do it right. Kung dun din mapupunta… gusto din namin mapunta sa sitwasyon na ‘yon. But right now, Nikki and I still have our jobs and careers that we still have to continue… to fulfill. When the time is right… alam mo ‘yung ayaw naming i-rush kasi d’yan nagkakaproblema, pag minamadali ang mga bagay.”
Nikki also said in a previous interview that she and Billy are saving up for their future, but Billy said that they are saving up individually. “Baka isipin ng tao joint account. We’re totally independent. Her money is her money and my money is my money, but we’re both just saving for our future,” he clarified.
Billy continued that he feels that he and Nikki are blessed to have individual thriving careers while they are able to keep their relationship strong, even if it’s far from being perfect.  “I couldn’t ask for more sa relationship namin. Di naman siya perfect… wala namang relationship na perfect, but it’s more than perfect for me,” he said.
Like any other couple, Billy said that they also have their share of disagreements, but aside from having an open communication to resolving their rifts, they try to keep some issues just between them. “Siguro the reason we’re keeping our relationship strong hindi namin pinag-uusapan sa lahat kung ano ‘yung pinag-aawayan namin. It’s our relationship. Kung anuman ang mali ng isang tao dun sa relasyon na ‘yon, sa amin na lang ‘yon.”
Celebrity