Anne Curtis clarifies questions over her revealing outfit on 'ASAP'

The 'Kailangan Ko'y Ikaw' actress denies that there was any wardrobe malfunction. 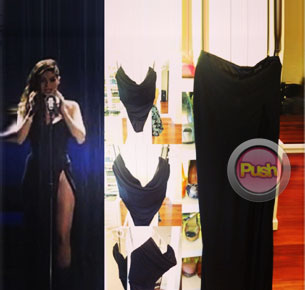 After her “wet look” performance as part of her birthday celebration on ASAP last Sunday, February 24, Anne Curtis responds through social media regarding her provocative outfit designed by local designer Boom Sason. The Italy-trained designer’s creation drew reactions from the
Movie Television Ratings and Classification Board (MTRCB) because of its high slit design which opened up speculation as to whether it was appropriate for Anne to bare so much during a noontime variety program. The effect looked even more daring when Anne got wet under artificial rain while singing Rihanna’s hit song “Diamond.” The 28 year-old actress clarified the issue when she posted on her Instagram and Twitter account last Wednesday, February 26, photos of the dress and a clarification that she did not have any sort of wardrobe malfunction.
“TAAAADAAA! I present to you the controversial @boomita outfit I wore for my birthday number on ASAP. As you can see we have a bodysuit with a hidden tangga to make way for the sky high slit skirt. It is made out of 2 pieces. In fact the "tangga" is made out of swimsuit material which Boom Sason is also known for making. I was completely protected. It may have seemed like a wardrobe malfunction to many but I can assure you, after making the mistake of not securing myself once I wouldn't let that happen to me again. :) So to settle all your minds I just had to post this. Thank you to everyone that was concerned! To everyone that's trying to make an issue out of it! Thank you! ABSCBN news just told me its their most clicked on video on their site ever! Just relax everyone! Wearing a tangga is no newbie in the industry! It's been around since the 80's :),” Anne was quoted in saying via her Twitter account @annecurrtissmith.
That same day, MTRCB also tweeted an announcement on their official Twitter account. @MTRCBgov: “MTRCB summons ASAP to gender-sensitivity investigation over alleged provocative outfit of one of its stars last Sunday.”
As of press time, ABS-CBN has yet to issue an official statement on the matter. For more Kapamilya updates, log on daily to Push.com.ph and follow Push_Mina on Twitter.
- Photo taken from Anne Curtis's official Instagram account
Celebrity