Iya Villania on longtime boyfriend Drew Arellano: 'The further we go, the stronger we get'

Iya Villania talks about the secret to her happy relationship with boyfriend of nine years Drew Arellano. 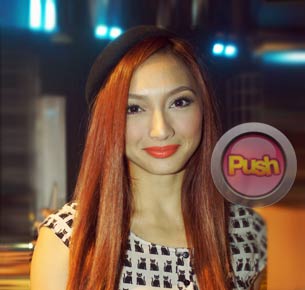 Iya Villania happily shared that that she had a simple yet romantic Valentine date with longtime boyfriend Drew Arellano. They celebrated it a day earlier since the latter had prior engagements for Valentine’s Day. At this point in their relationship, Iya claimed that she has never been happier even though they’ve been together for nine years. “Wala [kaming issue na nagkakasawaan] kasi we really took things slow. Kung tutuusin nga kahit nine years na kami, ang dami pa namin hindi nagagawa as a couple kasi inaantay pa namin na ikasal kami. So there are so many things we need to enjoy doing together,” she said in an interview with Push.com.ph after the press con for Blue Water Day Spa held at the EDSA Shangri-La Hotel yesterday, February 19.
While other couples are afraid of growing apart as time passes by, Iya said that she and Drew have only grown stronger through the years. “Sobrang sweet ni Drew. And what’s so sweet is the further we go, the stronger we get. A lot of people have always been afraid of the so-called seven-year itch [but we don’t worry about those things anymore]. Tumagal kami na eto lang pwede namin gawin, paano pa kaya kapag talagang naging one na kami?”
Although they have their fair share of trials as a couple, Iya revealed that the key is in understanding each other’s individual goals and trusting that they would give their best in the relationship. “Cool off? Yeah, we went through that. Pero kasi I wanted to scare myself kasi I’m the younger one. Kunyari sasabihin ko, ‘Honey, don’t cheat on me, ganyan ganyan.’ Sasabihin niya, ‘Honey—we were together when you were 18— you’re the younger one. You have so many things you have yet to experience.’ So we’ve had our fair share [of problems] but we always pull through. Ngayon sobrang sarap where we are in our relationship, considering na mag-nine years na kami.”
When asked if Drew got the chance to propose marriage to her last Valentine’s Day, Iya maintained that her boyfriend has yet to pop the question and give her an engagement ring. “Kayo talaga masyado kayong excited. Wala pa. Hindi ko suot o! Actually, dati talaga may ring kaming sinusuot ni Drew. I think he gave me that ring in 2009. Yes, it’s something like that (promise ring) or like a reminder of what we have. May sumunod akong singsing pero galing sa ate ko.” Nevertheless, she revealed that it’s only a matter of time before they get engaged. “According to my senses, I’m sure malapit na. Hello, nagugulat pa ba kayo?,” she exclaimed with a laugh.
When it comes down to it, Iya said that she has no problem juggling her showbiz career and settling down in the near future. She’s confident that her work won’t be affected if she gets married because celebrities don’t have to be single and unattached to succeed in the business nowadays. “I think times have changed. You can see that the audience has opened their minds. Tignan mo si Richard Yap. They all know he's married and yet people are attached to the love team he has with Jodi (Sta Maria). But he's very open [that he’s married]. And even with Dawn (Zulueta) and Richard (Gomez). Alam ng tao that they're happily married but their love team remained successful.”
Celebrity