Albert Martinez reveals the secret to his staying power in showbiz 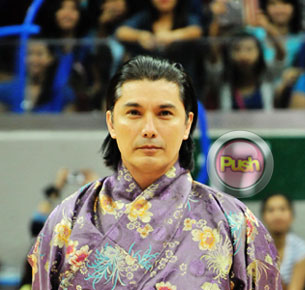 After playing the role of a king in Princess And I, Albert Martinez will assume the role of a king yet again in the fantaserye, Juan dela Cruz, where he portrays Samuel, the king of an aswang clan. At the recent press conference of the said teleserye, ZsaZsa Padilla, who portrays the wife of Albert’s character, was all praises for the seasoned actor’s impressive acting talent and professionalism.
After the press con, Push.com.ph asked Albert for his reaction to the Divine Diva’s compliment. “I’m deeply honored, I didn’t expect Miss ZsaZsa would say that, but I love my job, siguro that’s basically it. I love my job, I’m passionate about it and it’s the excitement of reporting to work everyday, so nadala ko ‘yung professionalism because of that, because ang core no’n is loving what I do.”
The actor continued that it is his attitude towards work that defuses the tendency of getting burned out. “Burnout is not only physical, burnout is also mental, meaning if you don’t love what you’re doing nabu-burnout ka whether it’s physically hard or not,” he explained. “It’s just that I love my job so much, tsaka every opportunity na di ako kailangan sa set, I sleep.” Apart from trying to get enough sleep whenever he is not at work, Albert added that he prefers to stay at home and rest rather than go out.
With a showbiz career that spans many years, Albert was asked for his opinion on what he thinks the new generation of actors today can work on to increase their chances of having a long lasting career. “Actually walang kulang. So far, the people I’ve worked with, itong mga bagong batch, mas sobra pa sila sa amin. ’Yung batch kasi namin hindi as extensive training as they are having now and most of them, they went to rigid training for dancing, acting, singing, hosting. Kami, hindi, eh. Nung time namin we didn’t do any training at that time. We’re just lucky at that time.”
Albert revealed that he decided to improve his acting skill by going through workshops. “I took it seriously. I took acting lessons after a while when I decided this is something I want to do for the rest of my life.”
Celebrity